Simple Living This Week No. 88

Happy Fourth of July weekend! While those of us who are Americans are celebrating our country’s Providential founding, we should also be fervently praying for it and our leaders. We need some significant Providential intervention right now.

Our family doesn’t have any special plans this weekend. I imagine with the gas prices and cost of food many people will be celebrating close to home which is fine. Imagine if we had old-fashioned celebrations like in the Little House books where a glass of lemonade was a treat? We’re so rich in this country in some ways, but so desperately poor at the same time.

I plan on doing small projects around the house and website-related things. It’s supposed to be hot and sunny so Caroline and I will make the best of it. (We’re both longing for clouds and rain.) The sunshine especially makes me so restless it’s hard to focus, to be totally honest. The sun goes down at night and my entire body relaxes. Same thing with a cloudy day. So the past couple of weeks have been kind of a drag for both of us with way too much sunshine and heat.  But we press on.

This week’s artwork is The Dame School (1887) by Frederick George Cotman. 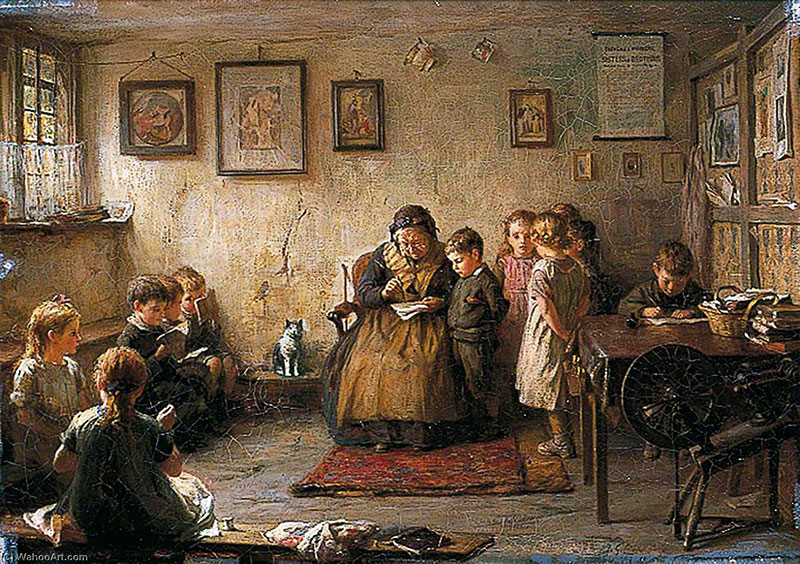 I used his most famous work, A Part of the Family, in my post Creating a Family Economy.

His Wikipedia entry says (edited by me for brevity):

Frederick George Cotman (1850–1920) was an English painter of landscapes, portraits and interiors and a member of the Norwich School of painters.

Frederick was born into the Cotman family of artists. His parents were Henry Edmund Cotman, formerly a Norwich silk merchant and his wife Maria Taylor… He was a private pupil of William Thomson Griffiths, the Head of Ipswich School of Art.

Cotman links with the Norwich School of painters arise mainly because of his family connection with John Sell Cotman, who was one of its leading artists. However he never lived in Norfolk, unlike so many of the artists of the school.

He worked in both oil and watercolours. His best known work, One of the Family, is now held by the Walker Art Gallery in Liverpool. Throughout his career, which was generally spent in London, he created over thirty paintings. He was a founder member of the influential Ipswich Art Club, and remained a member of it all his life.

It will be interesting to see if something old (dame schools) become new again. It seems we are heading that direction. Maybe not an exact match for them, but cottage schools and homeschooling pods are something very similar. When school choice becomes an option nation-wide and the money follows the student, education in this country will change in ways we can’t even begin to imagine.

I should write a post about dame schools. It’s an interesting part of history.

We are taking three more weeks off. I’m mulling and praying, but not really pushing myself to do much in this area right now.

I’m curious to see how Caroline will use the next three weeks. I’m an unschooler at heart, but we have never gone full-on unschooling. That’s why we’re relaxed homeschoolers. But she asked for more time off and we decided to take three more weeks off and re-evaluate at that time.

Caroline was very excited that Disney+ added six new National Geographic episodes called the Lost Treasures of Rome. She loves documentaries. A lot. Like a super lot. As in she’s getting a lot of her education via documentaries because they work so well for her. So we’re not homeschooling right now, but she can’t help herself because she loves history.

Yes, we still have Disney+. Don’t hate me. I feel conflicted every time the bill gets autopaid, but it’s the only streaming service we have. We have it because Caroline and David enjoy all the Star Wars spin-offs and Caroline loves the documentaries. She has suffered through so much the past three years with all the garbage we’ve been forced to endure as a nation that I’m not going to take away one of the things she truly enjoys no matter how much I loathe the Disney company with every fiber of my being. We’ve cut out so many woke companies from our life that I’m making the choice to endure this for her sake.

I’ve been doing some decluttering here and there, but nothing very systematic. (Reference previous comments about restlessness and sun.)

I need to call and make an appointment to get our chimney cleaned and inspected before other people start thinking about it. I’ve heard so much about how hard it is to get parts to practically everything that I don’t want to take the chance we need something done with our chimney and it can’t be fixed before autumn.

Our bucket garden is growing well. No photos today, but everything looks good! I’ll post another photo in the future. We have Russet potatoes, bush cucumbers, bush green beans, and cherry tomatoes planted.

We’re hoping to wash Venetian blinds this weekend. They are long overdue.

We also have beadboard and trim to finish adding to the ends of the kitchen cupboards from our house update four or five years ago. It’s one of those things that just didn’t get done and we haven’t carved out the time to do it. I’m really hoping we get that done this weekend. I’d like to knock off some of these things hanging over our heads.

David has been busy this week so he hasn’t had much time to help me with my projects. I’ve been doing other things that don’t rely on him.

To be honest, I’ve had a few times over the past few weeks where I almost removed all the news and Covid content from my website and forum. I’m tired of thinking about it. I haven’t done it, but I’ve been sorely tempted a few times.

I did spend quite a bit of time working with Ezoic this week to get the ads set up and working properly on both the front and back end. My ad income has already increased significantly compared to the pittance I was getting with AdSense. It’s certainly not going to make me rich, but it is something. If it can initially just offset the increases we’re facing in everything right now, it will be great. Like all of you, we’re getting hit from every side – electric, natural gas, Samaritan, food, etc. The only thing that isn’t impacting us directly is gas for the car. We barely drive so that’s had minimal impact on us unlike so many other people who have been hit hard with the rising prices.

So we’ll see what I find the motivation to do this weekend around the website. Sometimes I get in a groove and get a lot done! We’ll see.

That’s it for today. I’m sure I’m missing things, but they are escaping me at the moment. What are you doing lately? Things around the house and yard? Traveling? I hope you are healthy. It seems like so many people are sick right now. Leave a comment and share. ♥ 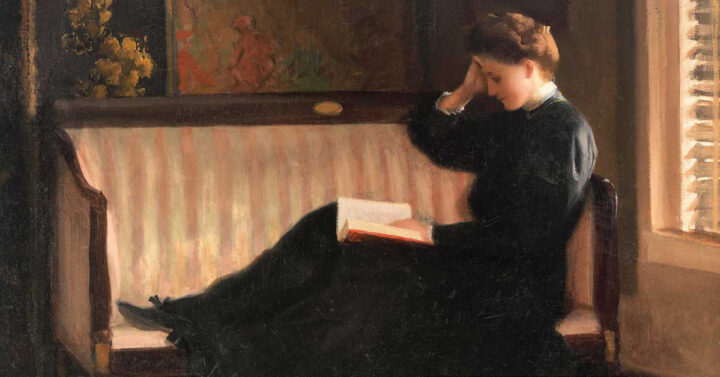 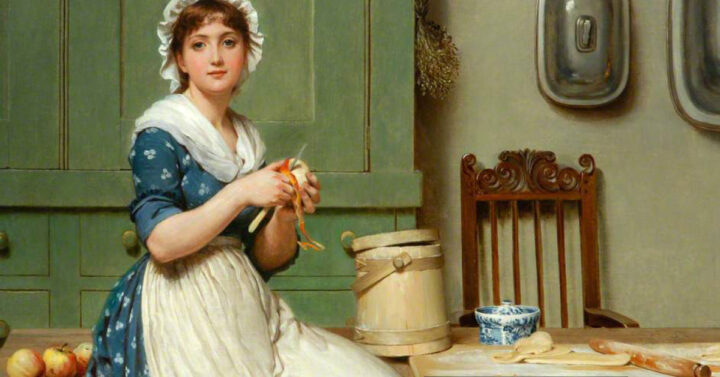 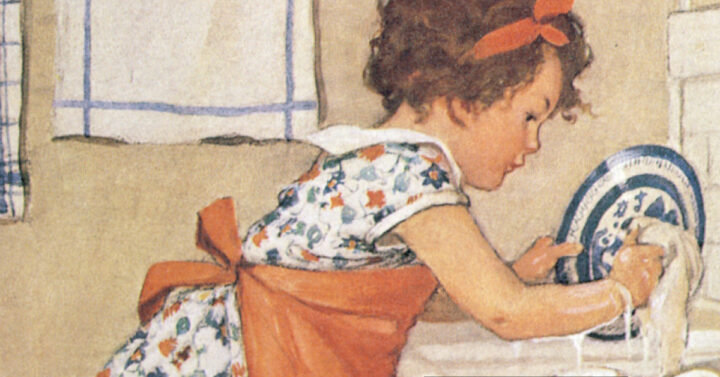 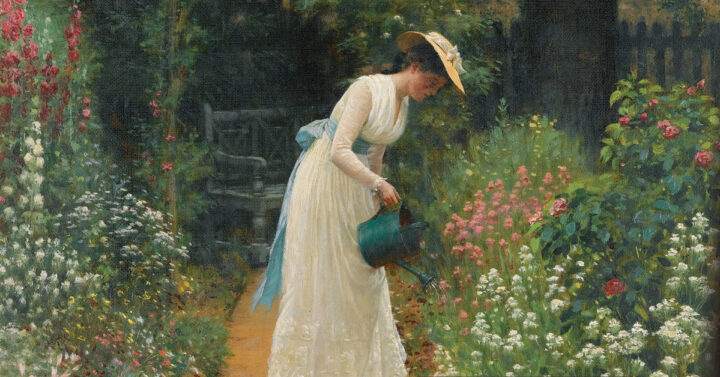