I want to write something here. I want to send out an email to my tiny remnant that re-upped their subscription when I changed email providers. (And I do mean tiny. Over 93% of my email list did NOT re-up. That’s not a typo. Less than 7% did. They are the tiny, faithful remnant.) If you saw the updated bio in the sidebar or saw what I added on the Start Here page then you probably already know where this post is going.

So I want to write something. But I abhor fakeness so I’m not going to come on here and prattle on about happy stuff when I don’t have it in me. I’ve watched over the past few months as two years of really hard and intense work have gone up in smoke due to the choices of the monopolies that control virtually every aspect of our lives, especially online.

Their choices have decimated the livelihoods of so many people. I know from multiple interactions with a wide variety of people that it’s not just me. It’s so many people in virtually every niche. And it’s not even that these monopolies are weeding out “bad” websites. The monopolies are being driven by making changes that are solely focused on their bottom line.

Whether it is Google, Amazon, YouTube, Facebook, Pinterest, Teachers Pay Teachers, or any of the other companies that impact the ability of millions of people to run their online or brick-and-mortar businesses, they all are making decisions with only one person ultimately in mind – their investors. The content creators that they’ve built their businesses on, be damned. They really don’t care about the people who make what they do possible. With the exception of Amazon, none of those companies would exist if other people didn’t create content for them to use.

As I’ve said before, they have built these monopolies on the backs of individual content creators working hard in their own little businesses and these same monopolies have the power to turn it all off on a whim. I can watch in my statistics as Google turns various filters on and off because my traffic, product sales, and ad revenue will fluctuate with it. Nothing has changed regarding the quality of my site or products. If anything, it’s only gotten better and better the past few years. However, the only thing Google is looking at is how to squeeze every last penny out of their search results by choosing the filtering that gives them the most ad clicks. It is not about providing the best answers for people. If you think Google is a search engine, you have been completely duped.

Before someone says something perky like, “You just need to pivot” or “Work is hard and you have to just keep going” or ” Owning a business is about change” I want to say that I’ve already used those approaches for a long time. I’ve done the pivot thing more than once. I’ve worked my behind off the past few years in an attempt to get over the proverbial hump in multiple ways. I’ve studied, read, and learned so much that I then applied to my individual situation. Every time I made any progress, I would get kicked back down by faceless people making changes to increase the profits for their investors with zero regard for how it would impact individual businesses.

These companies will tell you to do something a certain way. So you spend massive amounts of time doing it in order to play the game.

Pinterest wants to change how the feed looks on their site? They issue new dimensions for images. Somehow everyone is supposed to go back and redo hundreds or thousands of images in order to be seen on their site. A year or two later, they change it again.

Google wants everything to be high quality, optimized content according to certain SEO guidelines? Everyone reworks their content. Until Google decides that something else will bring them more money and they change everything a year later.

Teachers Pay Teachers tells you to follow general SEO best practices in writing your descriptions. Until they decide that their SEO is going to work differently than traditional SEO and now you have to go back and rewrite all of your product descriptions because they want something different. And if you don’t, your products are lost in the search abyss and no one will ever find them which means you make no money. So instead of creating great new products, you spend soul-sucking hours and days rewriting the opening sentences to your product descriptions.

Every monopoly does this over and over. They are obsessed with changing things and now it happens at warp speed.

How long do they expect content creators to keep this up?

The employees at the monopolies get paid no matter what happens.

The truth of the matter is I’m really not sure what to do next.

It’s just no longer worth it.

It’s becoming increasingly difficult to build anything online that will last unless you have a staff and a lot of money to pay-to-play. The monopolies are all-in on putting the little guys out of business.

YouTube basically announced that this week with their updated Terms of Service. Google owns YouTube and has been operating it at a loss in order to take over the online video space. Now they are going to remove any channels that aren’t profitable enough for them to host. So all the smaller funny, quirky and original channels will be gone. All that will be left is the big companies.

Google is not a search engine. It’s now all-in on being an advertising racket and they don’t even try to hide it. Their search results have become so bad in recent months that you now have to often go to the third page of results to find an answer that is an organic and content-focused answer instead of an ad or shopping page designed to ultimately make Google money. (I switched to Duck Duck Go months ago and encourage you to switch to it or Bing or something else.)

Last year my Amazon affiliate earnings could pay our natural gas bill most of the year. Now it won’t even pay to fill the gas tank of our car once. Why? Because Amazon has steadily decreased the affiliate payouts the past few years. They no longer need affiliates sending them traffic now that everyone is addicted to Amazon Prime and has creepy listening devices in their homes. They have virtually wiped out small and medium sized affiliates in favor of large conglomerates they are partnering with to write “product reviews” on their Amazon site.

And on and on.

I know it’s unseemly to discuss money, but I’ve never hid the fact that this website is part of the business I own with my husband. A lot of what I do here is interconnected with work he does for other clients.

But I also know that the average person who uses the internet has no idea what is happening. They have no idea how much they are being manipulated by the monopolies. They won’t understand why YouTube used to be full of fun and quirky channels and is now a repository of videos by the media conglomerates and Hollywood personalities.

So for now, I’m giving up. I’ve reduced the expenses of running this site as much as possible. I went to a cheaper email service. I got rid of the nice podcast player I was paying for each month. As I told some people, podcasting is a luxury. It takes a lot of time to write, record, and produce a podcast. I truly enjoy doing them, but I can’t ask David to devote time to producing them and creating the graphics when they add no value to our bottom line. It makes me sad to set aside the podcasting, but it’s a necessary economic choice in our home.

I really don’t know what I’m going to do next. I am thinknig of setting up an Etsy store for my clip art, planners, and other digital products that will fit in over there. I hope that will help replace one of the other income streams that has dried up to a trickle.

Maybe God has something else for me to do. I don’t know. There are so many people online now vying for attention. For a long time I thought I had a unique perspective to offer, but right now I just feel lost in a flood of monopolies and bureaucracies over which I have no control.

I’m tired and probably burned out. You can’t give when you are depleted. I preach that over and over again to homeschool moms and moms of gifted kids. I’m not going to be a hypocrite and pretend that all is great when it isn’t. Whatever my faults, I’m not fake. I never have been and don’t intend to start now. I don’t preach one thing to women who read what I write and run my life in a different way.

I don’t know when I’m going to write new content or what it will even be. I will put up the Friday Follow-up tomorrow and probably keep going on Streams in the Desert on Sundays since those are already created. But I have no idea beyond that.

I really don’t know what comes next. 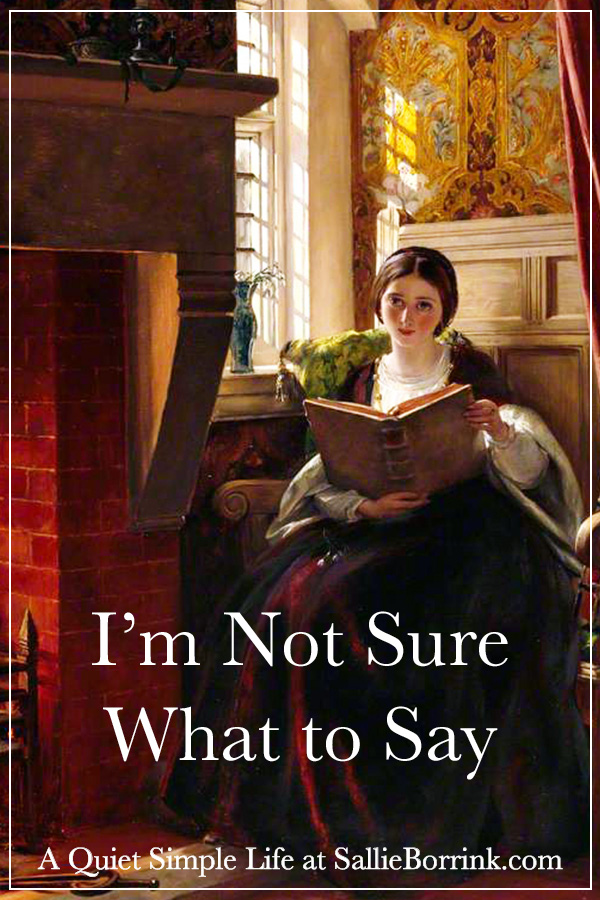 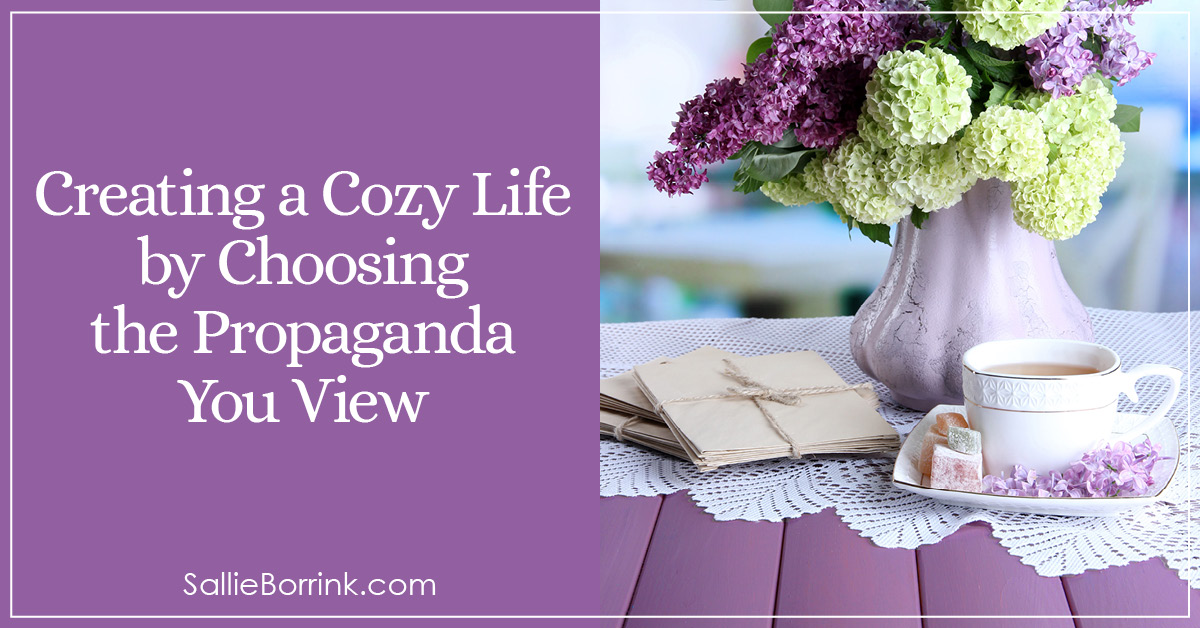 Creating a Cozy Life by Choosing the Propaganda You View 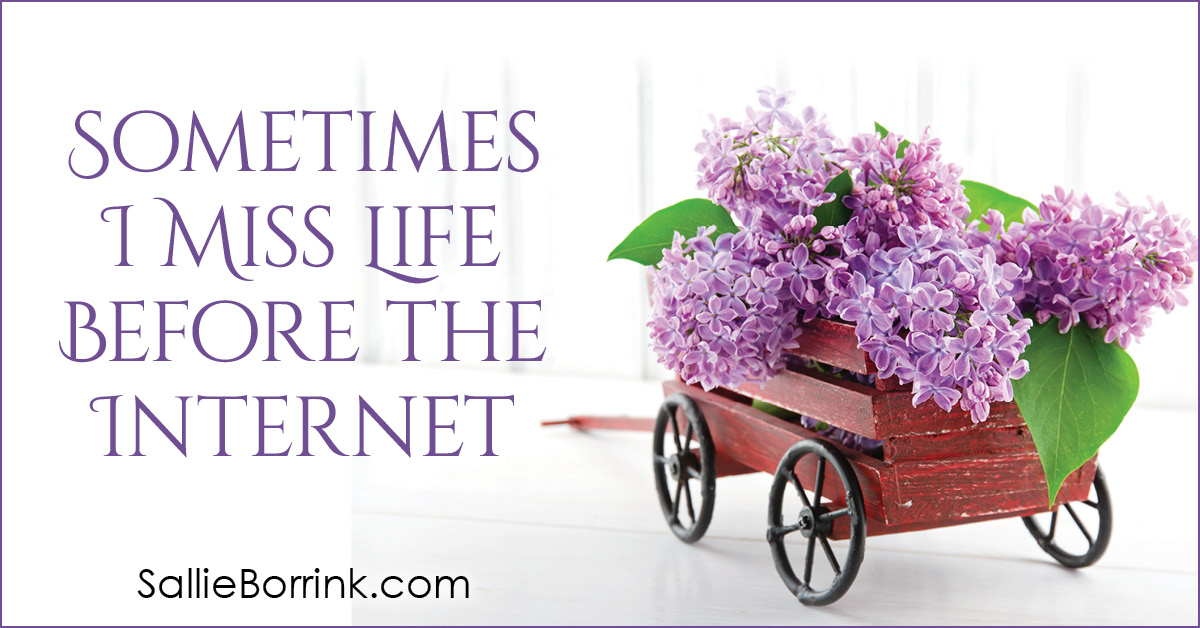 Sometimes I Miss Life Before the Internet 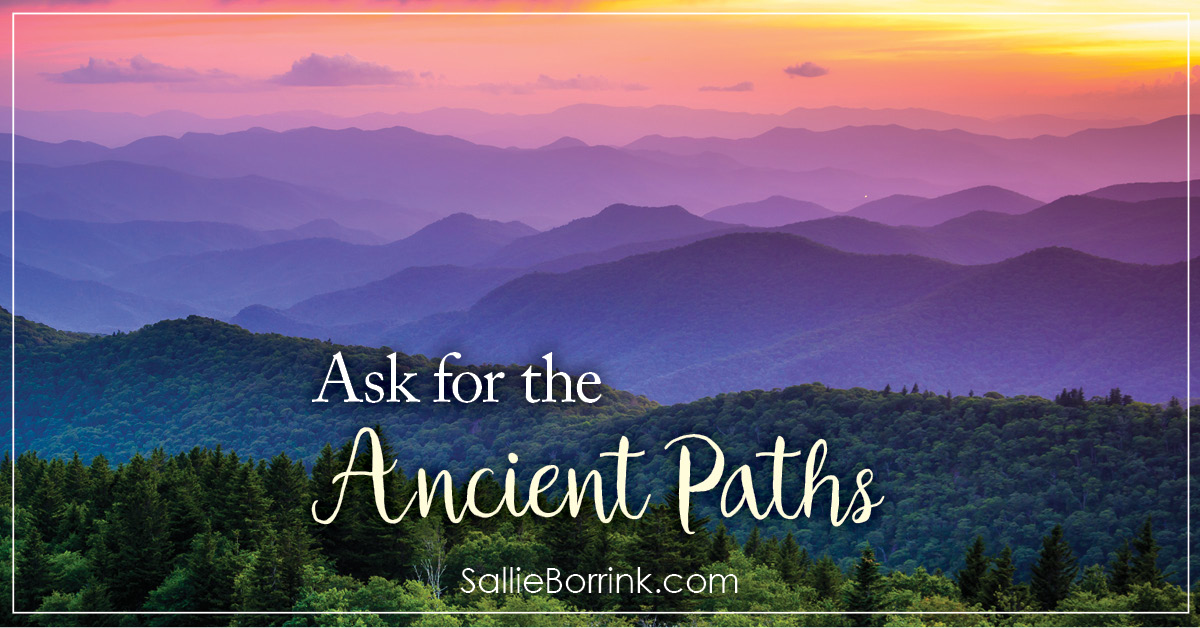 Ask for the Ancient Paths 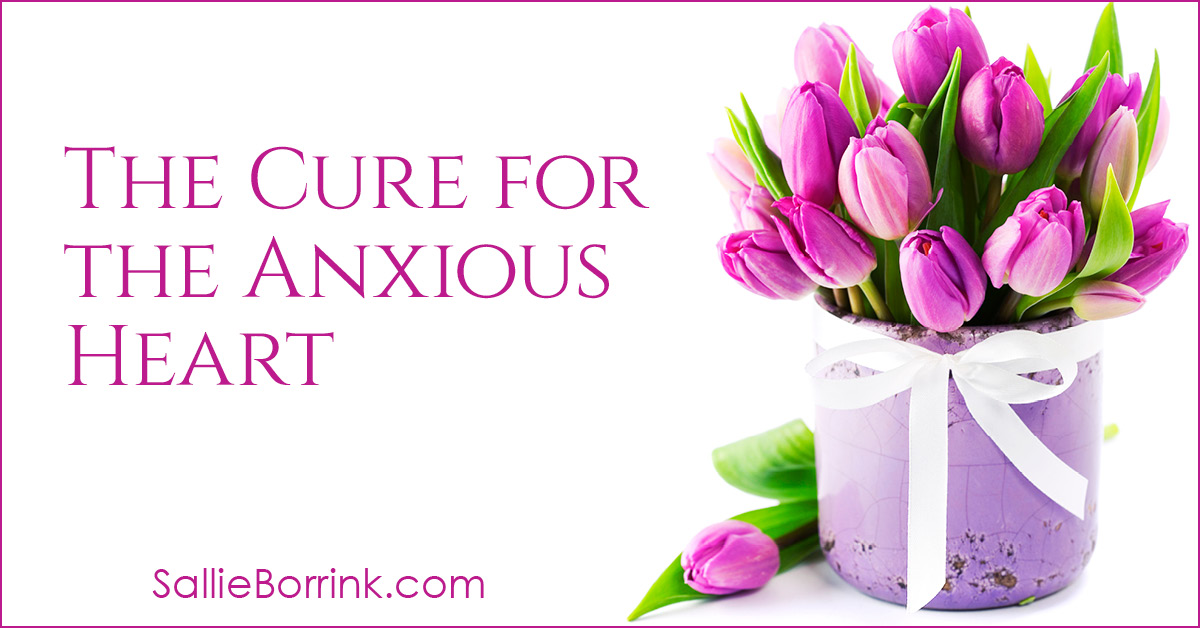 The Cure for the Anxious Heart

I’m Sallie and this is my online home where I write about my quiet simple life guided by Philippians 4:8 and 1 Thessalonians 4:11-12. If you are looking for helpful, honest, and thought-provoking insights from someone who loves living a cozy and home-centered life, please start here. Welcome! ♥

What are you looking for?

I'm no longer on social media so this is where I share links and chat about a wide range of topics. I add content daily and welcome comments. Click on the Forum button to enter.

I am not on Patreon and I do not put my videos on YouTube for one reason that can be summed up in three words - The First Amendment. I spend my time creating and curating content for my readers and subscribers, not dealing with arbitrary and unequally applied rules that undermine free speech.

“We who live in quiet places have the opportunity to become acquainted with ourselves, to think our own thoughts and live our own lives in a way that is not possible for those keeping up with the crowd.”
Laura Ingalls Wilder

“The power of finding beauty in the humblest things makes home happy and life lovely.”
Louisa May Alcott

"Nothing was so likely to do her good as a little quiet cheerfulness at home.”
Jane Austen, Persuasion

“Thank goodness I was never sent to school; it would have rubbed off some of the originality.”
Beatrix Potter
Scroll Up
X
We use cookies to ensure that we give you the best experience on our website. If you continue to use this site we will assume that you are happy with it.Ok