I’ve done a few reader surveys over the years, but I realized that I’ve never shared the results. As I was watching the survey answers accumulate over the weekend and on Monday, I thought at least some of you would be interested in the outcome. Some of the results were genuinely interesting.

So if you’ve ever wondered about the other women who read, subscribe, and comment, here is a snapshot of the main takeaways.

How old are you?

How long have you been reading?

This was remarkably even. The largest portion by several percentage points went to 2-5 years. An exact 25% have been reading 5+ years with half of those reading since before I was pregnant with Caroline.

I was also really pleased to see how many new readers there are who took the survey. Almost 40% of you have been reading for a year or less. This mix of readers also made me happy.

How did you find me?

Half of you don’t remember how you ended up here because it’s been too long. Another quarter came from a link on another website. The rest came from lots of different places.

Which general topics interest you the most?

This was interesting in that there was one clear top level, a middle level, and then everything else.

By far, the most popular choices were (in descending order):

The next tier was very close together with:

I was not surprised that the Gifted/2e had dropped off so much. I lost a lot of readers in that area when I started writing more openly about my Christian faith. It’s a trade-off I deliberately chose to make and would make the same choice again. I will always write about those topics because that is a huge part of my life as a parent and as an individual. I also think there needs to be at least a few people writing about gifted/2e from the Christian faith perspective and I am happy to be one of them.

That Sallie’s Miscellany did so well was a pleasant surprise. I almost didn’t include that in the survey, but added it at the last minute. I didn’t know if anyone really liked them, but apparently a lot of you do!

Which of the following best describe you?

Other than the top few, this was all over the place. The top answers were:

But virtually every option listed had multiple people who selected it whether it was type of work, location of work, type of homeschooling, unique aspects about your child, etc.

Special shout out to the 12 (!) people who answered who have an only child. I love knowing that!

The largest percentage went to High School which I confess surprised me a bit. That was followed in descending order by Middle School, Later Elementary, Early Elementary, and Preschool.

The largest percentage have both Boys and Girls. The rest was split almost evenly with Only Boys and Only Girls.

How are you educating your children?

The overwhelming answer was Homeschooling followed by Public School.

Which social media platforms do you use regularly?

Which social media platform is your favorite?

Although people use Facebook the most, it dropped off significantly in terms of favorite. It was still the favorite, but by a much smaller percentage. Instagram and Pinterest were about even. Again, a quarter of you avoid social media.

How often would you like to receive newsletters from me?

The overwhelming choice was Once a Week followed by Twice a Week.

Whoever answered “I’ll read as many as you send!” with a smiley face… If I ever have a PR team, I need to contact you. LOL!

The most popular answer (just barely) was “I probably won’t listen to your podcast.” I appreciate the candor and am taking it as a personal challenge to entice at least some of you to become regular listeners of my soon-to-launch podcast. LOL!

Quite a few of you prefer to listen to podcasts on the person’s actual website. You’ll be happy to know that will be an option for mine as well.

This was one of the most fascinating parts of the entire survey. What made it fascinating was the huge variety of podcasts that were listed. There were a handful focused on Christian women that came up more than once, but most were only mentioned once.

I’ve always thought that people who read my website were diverse in their interests and this clearly came through. Here is a tiny sampling of the wide range of podcast titles enjoyed by women here.

I have to admit my favorite new-to-me-podcast from the list based on name only was View from the Bunker. LOL!

Topics you would hope to find on my podcast?

There were some very helpful answers in this section.

Whoever said, “Any selection from your Miscellany” – thank you! There are a lot of things I put in my Sallie’s Miscellany that wouldn’t make a good full length post, but would make excellent podcast material. So thank you for that idea.

Other various written comments I loved

The suggestions for both posts and podcasts were geared toward the practical and how to. Asking to get more of a glimpse behind how I do things. So that is noted.

There were so many kind comments in the last section. I felt very encourage by them. Thank you. I wish I could respond to some of them directly, but since it is all anonymous I don’t know who said what. But I will be printing them out to look at again when I get discouraged at times.

A Word about Politics and Current Events

I have to admit it completely surprised me how many times this came up in the survey. I was astonished (really) by how many different people brought up the politics and current events thing in a positive way. It never crossed my mind that people would mention that, but it came up many times in the open-ended written comments or Other option.

I’ve made a commitment to not include politics in my site heading forward and that won’t change. The only way I could see myself making an exception would be due to serious pending legislation or something else that threatened the freedom to homeschool or practice my faith.

I had a bit of a lesson about this recently. I’ve shared before that I always buy David a Non-Sequitur 365 Page-a-Day Calendar for Christmas. I’ve done this for years. We both enjoy it. The calendars are two years removed from initial publication so this year’s calendar (2019) is comprised of comics originally published in 2017. We started the tradition of reading this comic well before the Obama administration. The cartoonist would create comics about politics from time to time which was fine. He would also sometimes make negative commentary about conservative Christians and people on the right, but we just kind of blew it off and enjoyed the rest. Now he’s moved to full-on bashing of President Trump (without naming him directly) and conservatives and it’s really diminished the fun for us because it was always meant to be a pleasant diversion.

It made me realize what it was like for the readers of my site who were really turned off by the politics when we discussed them. I lost quite a few subscribers during that time and I wish I could reach out to them, but I can’t.

All that said, I won’t do politics or current events on this site. I tried doing another site only about politics and current events, but it’s too much for me to keep up with current events and do a quality job with every other part of my life.

I thought about doing it on my Twitter account, but Twitter is such a stressful cesspool if you follow politics on there that I don’t think it’s best for my mental health. LOL! I have about two dozen people I will look up on Twitter to get their take and links on politics and current events, but I don’t follow them. But Twitter allows me to quickly get access to information when I need/want it so that is how I use it since I’m not on Facebook.

So I’ll never say never to doing something with politics and current events again, but it won’t be on this site. For now, I think it’s better to point people to a quiet, simple life and Jesus. But I did want to acknowledge the MANY comments related to this in the survey. It wasn’t just a couple of people. It came up a lot and I appreciated the kind words about what I did do with those topics at the time.

So that’s a peek behind the reader survey results! 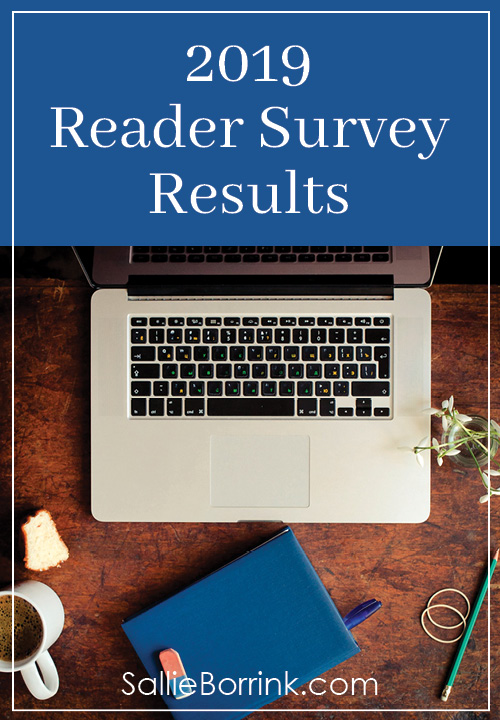