You are here: Home / Our Family Life / Pregnancy & Baby / Reflections On The First Year Of Parenting: Lack Of Encouragement

It only took me 364 days and 13 hours, but I finally figured out what the hardest part of the first year of parenting was for me.

It wasn’t the sleep deprivation.

It wasn’t the loss of freedom.

It wasn’t the disruption it has been to our marriage.

It wasn’t the financial expense.

It was the lack of verbal encouragement and support.

Reflects On The First Year Of Parenting

I’ve been thinking for a number of months about the posts I would write as I reflect on the first year of being a parent. I’ve thought about all kinds of things I could write. I could write a post on each of the “It wasn’t” statements above. And I may write about them at some point.

But it wasn’t until the evening before Caroline’s first birthday that I had my epiphany. It was like the proverbial light went on. It had to be the Holy Spirit because I don’t know how else to describe it.

My parents were here, helping us get ready for the birthday open house. I was feeling inadequate in terms of not being able to do everything in my life perfectly with excellence very well well enough. My mom said to me, “You’re doing fine.”

Now, I’m sure my parents have said things to us like this before in the previous 364 days. But as I was thinking about that comment from my mom, I realized that this is why the first year has been hard.

It is because we have received almost no positive verbal affirmation from any other sources.

Yes, we get lots of comments about how cute Caroline is and such. And we have gotten the very occasional comment about the fact that she seems like such a happy and contented baby. So it isn’t like we never heard anything positive.

But mostly it seems as though we’ve had a lot of people questioning our parenting decisions and being generally non-supportive of our choices. The two biggest areas have been the church nursery thing when someone said Caroline was our idol and the fact that Caroline is home with us all day.

Others Questioning Our Parenting Decisions

I don’t want to write much about the church nursery situation since this is a public website. But we have received a lot of passive aggressive comments about not putting Caroline in the nursery. We’ve obviously offended some people because we haven’t used the nursery. It has been bad enough that we have dreaded going to church for several months and have started the process of changing churches to a situation where this will not be as much of an issue.

We also get a lot of questions about the fact that Caroline is home with us all day and if she is afraid of other people. It’s like people think she never leaves our home or interacts with anyone else in the world. I suppose it is a lot like the questions homeschoolers get about socialization and whether or not the children will be able to function in the “real world.”

I know that not everyone is going to agree with the choices we make. But I would expect that people would have enough faith in David and me and our relative intelligence and spiritual life to trust us that we are making the best choices we feel we can for our family.

But it hasn’t felt like that a lot of the time.

Honestly, I’ve gotten a lot more support from women on here that I’ve never met and probably will never meet this side of heaven than I have gotten from the people who should have been there for me.

And that has been a bittersweet blessing and also a reminder of how alone we feel in our journey as parents.

A Difficult First Year of Parenting

It has been a hard year for a lot of reasons. And maybe if I had realized this primary reason sooner, we could have made adjustments and salvaged a bit more of the year. Hindsight is often 20-20 and we’ve done the best we could.

But I will say that this experience has opened my eyes to the need to look for ways to encourage other new parents who cross my path in the future. I don’t ever want another woman I know to be approaching her child’s first birthday and realize she’s just gone through one of the toughest years of her life and there was almost no one there cheering her on and pointing out to her all the things she was doing so well. 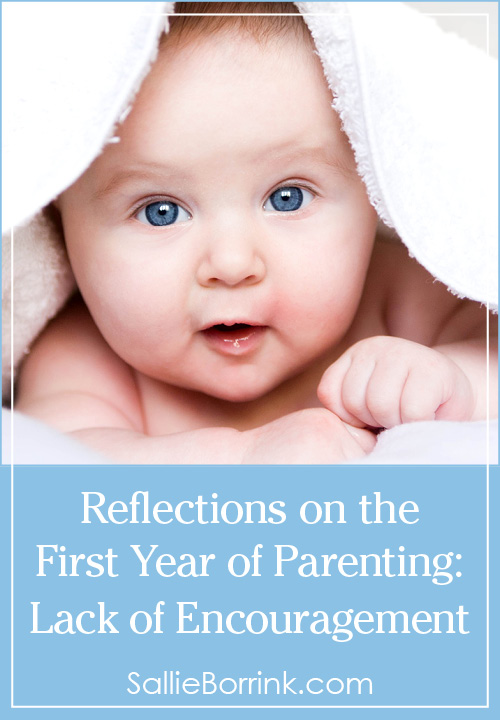 Crazy Busy or the Quiet of Home?
Next Post: Pecan Pie Mini Muffins