Dealing with Perfectionism in Our Children

You are here: Home / Gracious Christian Parenting / Dealing with Perfectionism in Our Children

Perfectionism can be a significant struggle in the lives of many children and adults. I consider myself a recovering perfectionist because I’m aware of my propensity to go in that direction and so I make sure I keep it in check. I’ve come a long way from where I was in the past although I suspect most people never completely change in this area. Because I was such a perfectionist as a child and young adult, the topic of perfectionism is one that I’m personally acquainted with – both the good and the bad. 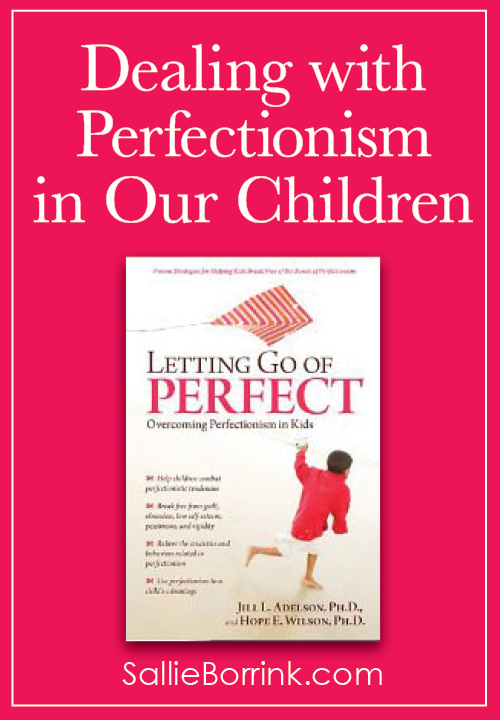 I’ve read quite a bit about perfectionism over the years in an attempt to deal with my own. I’m currently reading Letting Go of Perfect: Overcoming Perfectionism in Kids

which I received as a review copy from Prufrock Press. Like the introvert book I mentioned a few days ago, this is the first time I’ve tackled a book on the topic of perfectionism from the perspective of a parent reading to help her child.

While I really liked Quiet Kids: Help Your Introverted Child Succeed in an Extroverted World

and found it helpful, I’m a bit ambivalent about Letting Go of Perfect: Overcoming Perfectionism in Kids even though there are some very good aspects to it which I’ll explain below. The first couple of chapters are rather dry with numerous studies cited. For someone looking for lots of documentation, this would be a helpful book. I found the writing style breaks up the flow and made the chapters less readable and enjoyable. I also think they should have hired a better illustrator. The illustrations take away from the content. For such a serious book, the illustrations are very juvenile.

In our own experience with perfectionism so far as parents, the number one point we have made over and over again to Caroline is that failure is expected and a normal part of life. We’ve told her that if all three of us aren’t failing on a regular basis, then we’re missing out on opportunities to learn and grow.

I love the story of Sarah Blakely (founder of Spanx) whose parents asked her and her brother on a near daily basis what they had failed at. Failure was expected because it meant they were trying new things. For Sarah, failure wasn’t something to fear but embrace.

I think the willingness to embrace failure can go a long way in helping many perfectionists begin to deal with their perfectionism. If I have one regret from growing up, it is the fact that I wish I had failed earlier and more often so that I would have learned to overcome better in those situations. Hopefully I can encourage my child to embrace failure more readily and avoid at least some of the traps of unhealthy perfectionism.

The Joys of a Gifted Child
Next Post: Multipotentiality, Niche Blogging, Careers, and Real Life