Trusting in God’s Leading and Timing

“He maketh me to lie down in green pastures: he leadeth me beside the still waters. He restoreth my soul: he leadeth me in the paths of righteousness for his name’s sake.” Psalm 23:2-3

You are here: Home /Christian Faith / Trusting in God’s Leading and Timing

Help Others By Sharing

The short devotional in the picture is one I believe I’ve had for literally decades. It is a copy of a page from the free little monthly devotional book Our Daily Bread distributed at churches. This copy went with me everywhere in my purse for more years than I can recount. 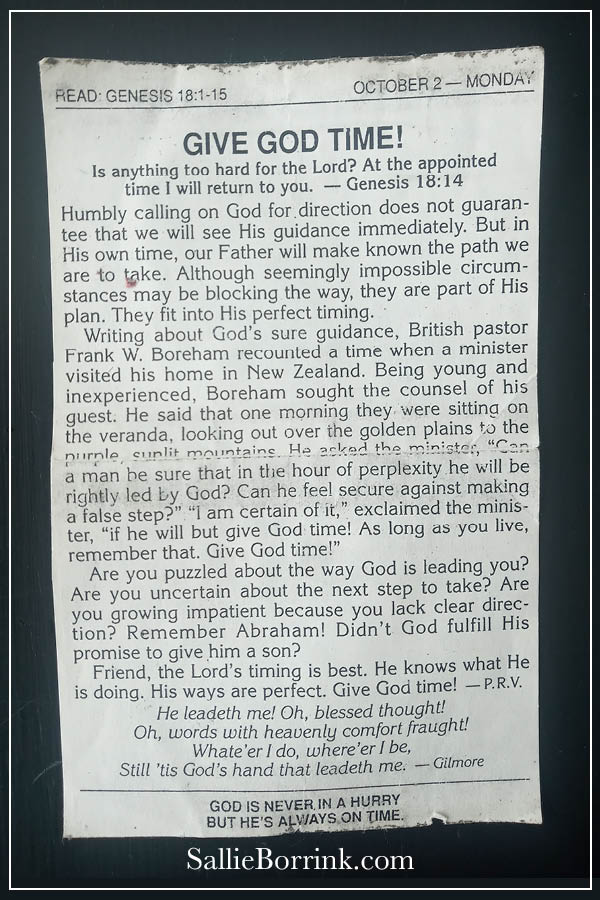 Waiting on God and developing patience was a significant theme in my spiritual walk for many years. For some reason this little devotional resonated with me and I referred to it time and again. First I was waiting to find the right man to marry. Then after finding him and marrying we waited many years before being blessed with our daughter.

It sounds trite, but God is far more interested in leading us than we are in following Him. If we seek His guidance in our imperfect human way, we can be certain that He will respond to the requests of His child. It might not be in the way we expect, but He will answer. As a loving and omnipotent Heavenly Father it would be impossible for Him not to respond to us.

I hope you find the following thoughts encouraging today. 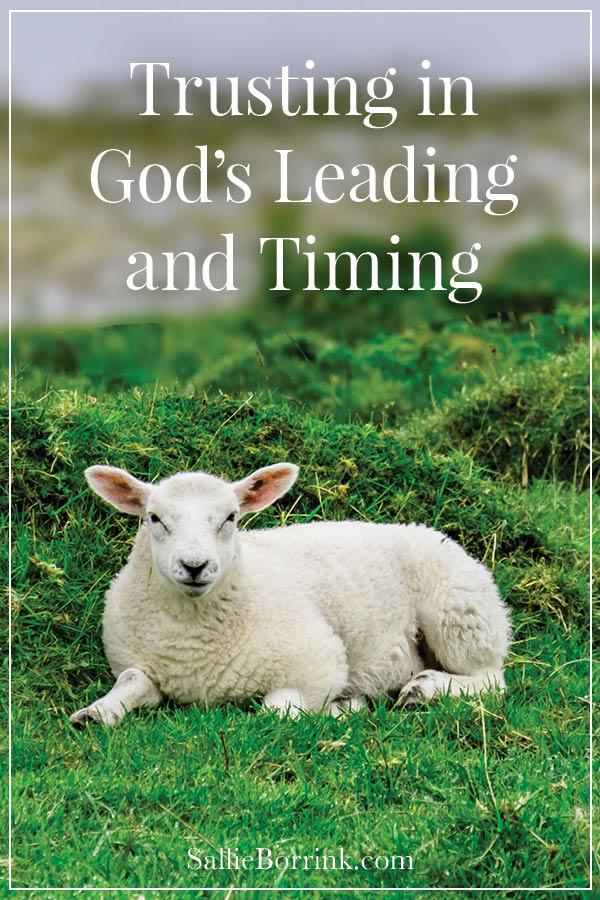 The Lord appeared to Abraham near the great trees of Mamre while he was sitting at the entrance to his tent in the heat of the day. Abraham looked up and saw three men standing nearby. When he saw them, he hurried from the entrance of his tent to meet them and bowed low to the ground.

He said, “If I have found favor in your eyes, my lord, do not pass your servant by. Let a little water be brought, and then you may all wash your feet and rest under this tree. Let me get you something to eat, so you can be refreshed and then go on your way—now that you have come to your servant.”

So Abraham hurried into the tent to Sarah. “Quick,” he said, “get three seahs of the finest flour and knead it and bake some bread.”

Then he ran to the herd and selected a choice, tender calf and gave it to a servant, who hurried to prepare it. He then brought some curds and milk and the calf that had been prepared, and set these before them. While they ate, he stood near them under a tree.

“Where is your wife Sarah?” they asked him.

Then one of them said, “I will surely return to you about this time next year, and Sarah your wife will have a son.”

Now Sarah was listening at the entrance to the tent, which was behind him. Abraham and Sarah were already very old, and Sarah was past the age of childbearing. So Sarah laughed to herself as she thought, “After I am worn out and my lord is old, will I now have this pleasure?”

Then the Lord said to Abraham, “Why did Sarah laugh and say, ‘Will I really have a child, now that I am old?’ Is anything too hard for the Lord? I will return to you at the appointed time next year, and Sarah will have a son.”

Humbly calling on God for direction does not guarantee that we will see His guidance immediately. But in His own time, our Father will make known the path we are to take. Although seemingly impossible circumstances may be blocking the way, they are part of HIs plan. They fit into His perfect timing.

Writing about God’s sure guidance, British pastor Frank W. Boreham recounted a time when a minister visited his home in New Zealand. Being young and inexperienced, Boreham sought the counsel of his guest. He said that one morning they were sitting on the veranda, looking out over the golden plains to the purple sunlit mountains. He asked this minister, “Can a man be sure that in the hour of perplexity he will be rightly led by God? Can he feel secure against making a false step?” ” I am certain of it,” exclaimed the minister, “if he will but give God time! As long as you live, remember that. Give God time!”

Are you puzzled about the way God is leading you? Are you uncertain about the next step to take? Are you growing impatient because you lack clear direction? Remember Abraham! Didn’t God fulfill His promise to give him a son?

Friend , the Lord’s timing is best. He knows what He is doing. His ways are perfect. Give God time! — P.R.V.

I hope you are blessed by this hymn and the video version of it at the end of the lyrics. If you would like to read the short story behind the hymn, see He Leadeth Me (Gilmore).

He leadeth me! O blessed thought,
O words with heav’nly comfort fraught;
Whate’er I do, where’er I be,
Still ’tis Christ’s hand that leadeth me.

Lord, I would clasp Thy hand in mine,
Nor ever murmur or repine;
Content, whatever lot I see,
Since it is Thou that leadest me.

And when my task on earth is done,
When, by Thy grace, the vict’ry’s won,
E’en death’s cold wave I will not flee,
Since Thou in triumph leadest me.

Help Others By Sharing

Simple Living This Week No. 56
Next Post: What Is A Gracious Christian Parent?