The Cure For The Anxious Heart

“Turn your eyes upon Jesus, Look full in His wonderful face, And the things of earth will grow strangely dim, In the light of His glory and grace.”

You are here: Home / Christian Faith / The Cure For The Anxious Heart

Probably the best thing I have read in the secular press about how the current economic situation is impacting the average person was a piece by Peggy Noonan entitled “There’s No Pill for This Kind of Depression.”

It is well worth reading the whole thing.

People sense something slipping away, a world receding, not only an economic one but a world of old structures, old ways and assumptions. People don’t talk about this much because it’s too big, but I suspect more than a few see themselves, deep down, as “the designated mourner,” from the title of the Wallace Shawn play. I asked a friend, a perceptive writer, if he is seeing what I’m seeing. Yes, he said, there is “a pervasive sense of anxiety, as though everyone feels they’re on thin ice.”

To me, one of the signal signs of the times is the number of people surfing the Internet looking for . . . something. One friend looks for small farms in distressed rural areas. Another logs on late at night looking for a house to buy in a small town out West, or down South, or in the Deep South. She is moving all around America in her imagination. I asked if she had a picture in her head of what she was looking for, and she joked that she wanted to go where Atticus Finch made his summation to the jury. I don’t think it was really a joke. She’s not looking for a new place, she’s looking for the old days.

I spoke to a Manhattan-based psychiatrist who said there is an uptick in the number of his patients reporting depression and anxiety. He believes part of the reason is that we’re in a new place, that “When people move into a new home they increasingly recognize the importance of their previous environment.” Our new home is postprosperity America; the old one was the abundance; we miss it. But he also detected a political dimension to his patients’ anguish. He felt that many see our leaders as “selfish and dishonest,” that “our institutions have been revealed as incompetent and undependable.” People feel “unled, overwhelmed,” the situation “seemingly unsalvageable.” The net result? He thinks what he is seeing, within and without his practice, is a “psychological pandemic of fear” as to the future of things—of our country, and even of mankind.

I think the term “pandemic of fear” is an accurate one.

I have struggled with fear and anxiety of late and I know from emailing and talking with others that I am certainly not alone. In fact, I would be surprised if there are very many people who aren’t feeling some level of fear, anxiety, or apprehension about the future. So believe me, when I write these things here today, I’m not looking down my nose at anyone from my lofty perch of perfect serenity.

The Cure for Anxiety

Last night I was reading through an old issue of Decision Magazine someone had passed along to me. Put out by the Billy Graham Association, it had an article called the “The Cure for Anxiety.” It had some good and timely thoughts and I looked it up this morning to share here on my site.

But what struck me when I found it online was that it had been written originally in 1959. It then made sense why Graham kept speaking of “modern” men and women, a term no one would use today. But 50 years ago these words were true and if they were true then, they are even truer today.

Historians will probably call our era “the age of anxiety.” Though we have it easier than our forefathers, we have more uneasiness. Inwardly we are more anxious. Callused hands were the badge of the pioneers, but a furrowed brow is the insignia of modern men and women.

Our chief concern is physical and temporal. Vast numbers of people actually believe that if we all have food, shelter, clothing, education and recreational facilities we will have attained utopia. Many of our statesmen, much of our literature and most of our commercial advertising support this utterly false view. Television advertisements lead us to believe that the greatest catastrophe that could come upon a man would be to have a five o’clock shadow or yellow teeth.

This undue emphasis upon the importance of the body—and the neglect of more important issues—has made us more concerned with the accommodations of life’s journey than with its destination.

Modern men and women have fled to ivory towers and there, surrounded by luxuries and gadgets, they hide from reality, from their conscience and from God. But they are hounded by the feeling that they are not the people they ought to be, that they are not living the life they ought to live, and that “life [is] more important than food, and the body more important than clothes” (Matthew 6:25).

Modern men and women have tried to fill the vacuum of their empty souls with things that have proved inadequate to satisfy their deeper longings and hungers. External luxury is a cheap substitute for spiritual wholeness.

Anxiety is the natural result when our hopes are centered on anything short of God and His will for us. When we make anything else our goal, frustration and defeat are inevitable. Turn your eyes on Christ; worship Him. He will never fall or fail. He gives life balance, security and peace.

Graham goes on to talk about how to rid ourselves of anxiety:

To all who wish to be rid of anxiety, I would make three simple suggestions:

First, stop seeking the trivial, transient things with which modern men and women glut themselves, and seek the Kingdom of God as it is revealed in Christ. Let God’s life surge through your soul as you, by faith, put the whole weight of your burdens on Jesus Christ, who died for you.

Second, get your eyes off yourself; focus them upon God first, and then others. Self-centeredness is a terrible breeder of anxiety. Spend much time in prayer, and let a large portion of this time be spent in praying for others.

Third, commit yourself fully to Christ. The truly happy Christian is the one who is fully and wholeheartedly committed to Christ. Be that kind of follower of Christ! You will find that your anxiety will dissolve like mist in the morning sun.

Turn Your Eyes Upon Jesus

This morning the Holy Spirit put a hymn in my head, especially the words to the refrain. I hope you will find comfort and encouragement as I have today.

O soul, are you weary and troubled?
No light in the darkness you see?
There’s a light for a look at the Savior,
And life more abundant and free!

Refrain:
Turn your eyes upon Jesus,
Look full in His wonderful face,
And the things of earth will grow strangely dim,
In the light of His glory and grace.

Through death into life everlasting
He passed, and we follow Him there;
Over us sin no more hath dominion—
For more than conquerors we are!

His Word shall not fail you—He promised;
Believe Him, and all will be well:
Then go to a world that is dying,
His perfect salvation to tell! 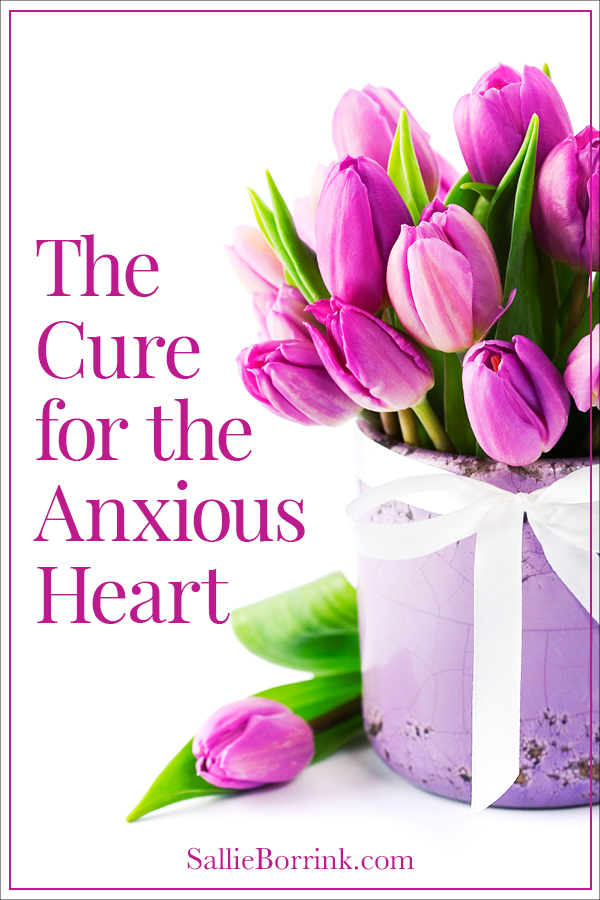 Baby Einstein Alphabooks & Board Book Sets
Next Post: God Cares About It All