This week went by in such a blur! Was it that way for you? I started writing this Thursday evening after working almost all day on various posts and podcasts. It’s now Friday morning and I’m back to finish it up and post it. 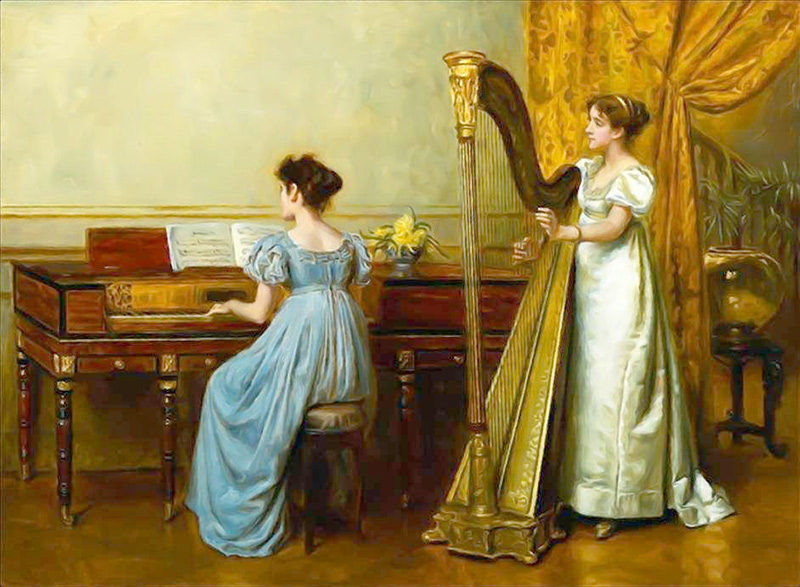 Wikipedia tell us (edited for brevity):

George Goodwin Kilburne (1839 – 1924) was an English genre painter specialising in accurately drawn interiors with figures. He favoured the watercolour medium, although he also worked in oils, pencil and initially trained as a wood-engraver.

George was born at Hackford near Reepham in Norfolk, the eldest of the three children of Goodwin Kilburne and Rebeccca Button.

Kilburne was educated at Hawkhurst, Kent – his father’s old school. On leaving at the age of 15, he went to London to serve a five-year apprenticeship as a wood engraver with the Dalziel brothers. He was highly regarded by his employers, who described him as “industrious and constant” and “one of the most satisfactory pupils we ever had”. His time as an engraver served him well, allowing him to develop the accuracy and detail which would enhance his subsequent painting. He remained with the firm for a further year before leaving to take up watercolour and oil painting professionally, quickly becoming one of the most sought after and well-known artists in England.

George’s paintings often portrayed the upper classes and ultra-fashionable female beauties in opulent late 18th- and early 19th-century settings. His depiction of this beauty was heightened by his attention to detail with dress, and richly decorated interiors. During that period his paintings would have been considered traditional, especially compared to the work of contemporaries such as James McNeill Whistler and the Pre-Raphaelite Brotherhood.

I wish I had learned to play the harp. There has never been the right combination of time, money, and opportunity. I also wish I knew how to play the cello. Do you think we’ll be able to learn to play instruments in heaven? I wonder about things like that.

May I take a few sentences to discuss something that drives me nuts?

Every summer from June through September we are on the higher electric rates between 2-6 p.m. It totally messes up my homemaking life. You would think it wouldn’t be that big of a deal, but it is for me. The rest of the year I have a rhythm to my life where it regards laundry especially. But the summer rates just mess it all up. The rates are jacked up enough that I can’t ignore it and just do whatever I want. I’ve tried all kinds of ways to deal with it and it all comes back to I can’t find anything that creates the flow I have the rest of the year. It is the biggest relief when we hit October 1 and I no longer have to think about it.

But it’s my world and the world I live in.

I did not get my kitchen cleaned out this week. It’s getting pushed back to next week (again).

I did my bigger monthly grocery shopping trip. Bigger is now a relative term. Every month the final cost is higher and the number of bags is smaller. I didn’t even make it out of the HBC/Medication area before I had spent $100. It was a small – and I do mean small – little huddle of products in the back corner of the shopping cart. When we got married, our weekly grocery budget was around $75. If I spent $135 in a week, it was a massive stock up for the two of us.

I don’t know how this is all going to end, but the average middle class or lower middle class family is not going to be able to absorb this forever. I am genuinely concerned for people on small fixed incomes. This is developing into a true tragedy. What makes it even more tragic is the fact that I don’t think we’ve even gotten close to the worst part of it yet.

I think Caroline and I are going to start doing a few things next week. Nothing close to a full schedule, but just getting a bit done each day.

Honestly, I’d like to do nothing until after Labor Day but I know from many years of experience now how the fall goes. Caroline’s birthday comes around in late September and it seems to short-circuit her for about a week with building excitement and then a post-birthday crash. Thanksgiving. Christmas. The annual fall cold or whatever. Every time we seem to hit our stride in September or October for a few weeks, something blows it up. Add to that whatever is going to develop in our country this fall and it seems wise to start doing a bit.

I had a full week of publishing and podcasting around here:

I also added massive amounts of information to the Forum on a variety of topics and not all of them are news-related.

Today I’m going to spend more time adding to my Made By Teachers store. They have a back-to-school sale next week and I would like more items in my shop. I’m only adding a part of what I actually have created for my own website Shop. Right now I’m focusing on adding the products that are truly unique and historically sold well in other places (if you know what I mean). So I’m focusing on things like my:

After that I’ll add my products in the areas where I typically did well before and the options seem thinner on this new platform. So I’ll start adding in my themed Copywork, etc.

We’ll see how it goes. I joined Made By Teachers at the worst time of the year for the selling cycle so I have no idea what a normal year would be. A little fairy told me that (according to discussions in certain places) sales are way down on another similar platform that shall not be named. I’m not surprised. Schools are experiencing the perfect storm.

I heard online last night that one large school district in the south starts school in less than a week and they are short 200 teachers. TWO HUNDRED. And that’s just one school district. Multiply that across the country.

Still, every little bit of income helps so I’m trying to add an additional income stream via another platform.

I received my first payout this week from Ezoic for the ads on this website. It wasn’t a lot ($57), but over time these small amounts add up. I continue to learn about how to use everything they offer and making the most of it.

I’ve been preaching this for so long (Building A Small Diversified and Profitable Online Business), but every time a family adds an additional income stream to their life they increase their chances of making it through hard times. Most of us are going to have to hustle and work hard to make it through whatever is coming. We’re going to have to make the most of every single r Federal Reserve Note that comes into our hands. What can you do? What do you have to offer to others that they will pay you for? Start thinking now if you haven’t already.

So what happened in your home this week? I hope you’ll share. As others have said recently in the comments, it’s fun to read what other women are doing. I personally find it encouraging and inspiring!

Category: In Our Cozy Home This Week 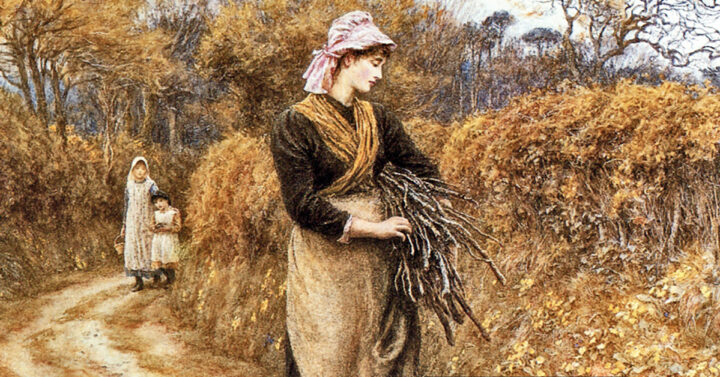 In Our Cozy Home This Week No. 36 – Prettifying My Office Closet, Updating Printables 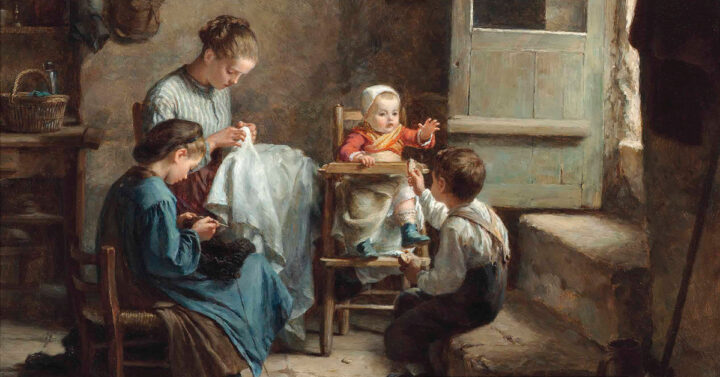 In Our Cozy Home This Week – No. 84 – Mending, Pantry, Supply Chains, My Office, and Homeschooling 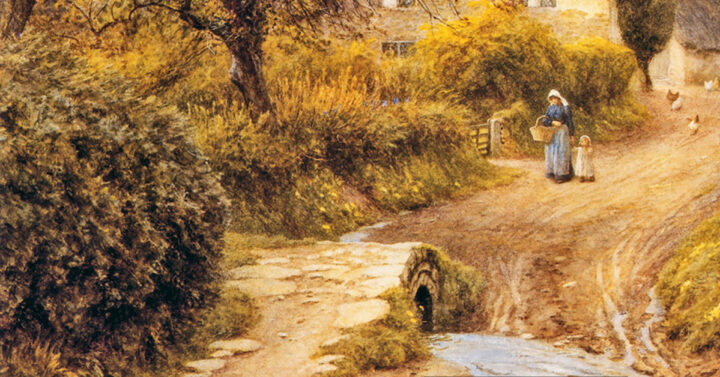 In Our Cozy Home This Week No. 45 – Being Self-Employed, Mother Culture, Grand Solar Minimum 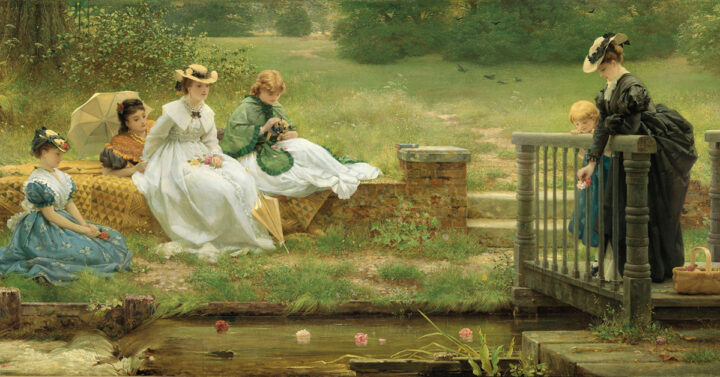