I’m Really Not Into the Postmodern Messiness

It is interesting that the postmodern is supposed to be all about the authentic and yet I find so much of the postmodern trappings to come across as anything but authentic.

You are here: Home /Christian Faith / I’m Really Not Into the Postmodern Messiness

I recently left a comment on another blog that I tend not to read blogs written by younger women. There are exceptions, to be sure, but most of my blog reading is comprised of women who are closer to my own age, give or take several years.

I came across an interesting post entitled Letting Go based on a talk given at a MOPS convention. In the talk, Jen Hatmaker outlines the differences between modern and postmodern thinking. I don’t feel comfortable copying the lists and posting them here since they are lengthy, so you’ll have to click over and read them in the post. If you don’t read the lists and the premise of her talk, the rest of this probably won’t make sense.

Which leads me to my questions.

Where do you see yourself fitting?

Those of you who have children still at home… Do you see what Hatmaker is talking about in your own children?

I’m wondering how much the pull of the postmodern for youth today is peer driven and if homeschooling has an impact on that. How much of it is media driven?

It isn’t like children wake up and realize they want to be postmodern. That thinking is coming from somewhere. The thoughts are being planted. Where is it coming from? Where is it impacting your family? Are you driving it? Or are you fighting it yourself? Have you reluctantly capitulated? 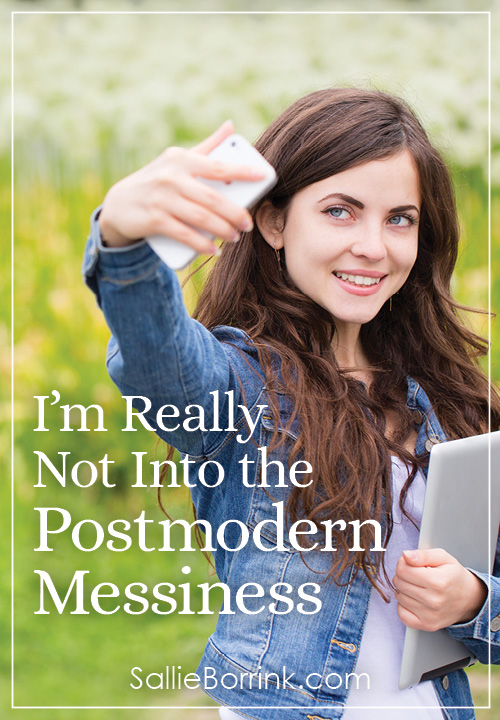 The Fake Authenticity and Falseness of Postmodernism

It is interesting that the postmodern is supposed to be all about the authentic (another word I’ve wearied of) and yet I find so much of the postmodern trappings to come across as anything but authentic. I find them really unappealing in so many ways. So Hatmaker’s belief that we as adults with a foot in both the modern and postmodern worlds need to more fully embrace the postmodern for the sake of our children… I don’t know. I guess I’m just not there.

I think it is because there is so much about the postmodern that seems unbiblical to me and so I have no interest in embracing it. But maybe it is because I am so thoroughly modern that I choose not to move past my own views.

It’s interesting being an older parent. I’m 45 with a 5 year old. I cannot even imagine the world that Caroline will have to live in. I can’t even say I’m really excited for her. Truth be told, I actually feel sorry for her at times. I don’t look at her future world with anticipation. Maybe I’m completely wrong, but the future doesn’t look rosy to me as an American, as a Christian, or as a member of the world community.

Is God at work? Absolutely! Is God at work in her life? Yes. But I’m not really excited about the future for her (or me, for that matter). I honestly don’t see postmodernism leading to good things. I know there are people who do, but I’m not one of them.

I’d seriously like to hear what people think about this topic.

Christian Women Who Love Wallowing in Sin
Next Post: My Number One Rule for Saving Money