July 4th is an important day in the life of America. Of course, the most prominent reason is the signing of the Declaration of Independence in 1776, hence the name Independence Day.

But did you also know several other historically significant events occurred on July 4th? Perhaps one of the most interesting facts is that both Thomas Jefferson and John Adams died on July 4, 1826 – the 50th anniversary of the signing of the Declaration of Independence! As Americans, we owe a tremendous debt of gratitude to these two men. What they accomplished on behalf of this country can hardly be overstated. I have always found it fascinating that each of them passed away on the 50th anniversary of such an important event in the history of the country they loved and served.

One of my historical heroes was born on July 4th as well! Calvin Coolidge, the 30th President of the United States, was born in Plymouth, Vermont in 1872. Many years ago, David and I took a two week trip to Vermont, New Hampshire, and Maine. Our primary reason to go was to see the autumn color but also to visit a number of places that intrigued us. We had not planned on visiting the Coolidge Homestead, but made some adjustments in our plans when an innkeeper highly recommended it to us. We are so glad we did! (The pictures are not the greatest quality because they are pre-digital camera!) 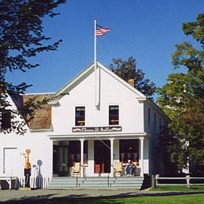 Coolidge grew up in the tiny town of Plymouth Notch, Vermont. The town is now the President Calvin Coolidge State Historic Site and has been preserved just as it was when he was growing up there. He was raised in an era and place of strong Puritan values by a father who was well-respected in the community. This photo is of the General Store of which his father was first the storekeeper and then the owner. Coolidge was born in the downstairs bedroom in the house attached to the store. They lived in this house until 1876 when they moved across the street to what is now known as the Coolidge Homestead. Also attached to the General Store is the Plymouth Post Office which was in use until 1976. 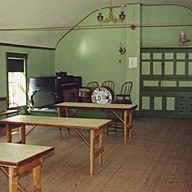 Above the General Store is a large vaulted room known as Coolidge Hall. In 1924 it was President Coolidge’s Summer White House. (Can you imagine such a humble place being the Summer White House today?) I remember being told that the postmisstress at the time was paid according to how many pieces of mail she processed. If my memory serves me correctly, during the summer of 1924 she processed approximately as many pieces of mail as she would normally have done in 40 years! So the Summer White House was quite a financial windfall for this woman from a tiny hamlet in the hills of Vermont.

Coolidge Is Sworn In As President At Vermont Homestead

Coolidge had one of the most unique experiences in how he became president. In his autobiography, The Autobiography of Calvin Coolidge

, Coolidge explains the events surrounding his presidential oath of office while visiting his father in Vermont:

On the night of August 2, 1923, I was awakened by my father coming up the stairs calling my name. I noticed that his voice trembled. As the only times I have ever observed that before were when death had visited our family, I knew that something of the gravest nature had occurred…

He placed in my hands an official report and told me that President Harding had just passed away. My wife and I dressed at once.

Before leaving the room I knelt down and, with the same prayer with which I have since approached the altar of the church, asked God to bless the American people and give me power to serve them.

Meantime, I had been examining the Constitution to determine what might be necessary for qualifying by taking the oath of office. It is not clear that any additional oath is required beyond what is taken by the Vice-President when he is sworn into office. It is the same form as that taken by the President.

Having found this form in the Constitution I had it set up on the typewriter and the oath was administered by my father in his capacity as a notary public, an office he had held a great many years.

The oath was taken in what we always called the sitting room by the light of the kerosene lamp, which was the most modern form of lighting that had then reached the neighborhood. The Bible which had belonged to my mother lay on the table at my hand. It was not officially used, as it is not the practice in Vermont or Massachusetts to use a Bible in connection with the administration of an oath.

Besides my father and myself, there were present my wife, Senator Dale, who happened to be stopping a few miles away, my stenographer, and my chauffeur.

…Where succession to the highest office in the land is by inheritance or appointment, no doubt there have been kings who have participated in the induction of their sons into their office, but in republics where the succession comes by election I do not know of any other case in history where a father has administered to his son the qualifying oath of office which made him the chief magistrate of a nation. It seemed a simple and natural thing to do at the time, but I can now realize something of the dramatic force of the event.

Coolidge was a true Vermonter. He was thrifty, self-reliant, and principled. This quote, taken from a speech he had given, was on the front of a campaign pamphlet for when Coolidge ran for re-election. I am amazed at how true these words continue to be eighty years later:

There are many wonderful stories told about Coolidge. Perhaps one of the most famous deals with his brevity of words and wit.

Both his dry Yankee wit and his frugality with words became legendary. His wife, Grace Goodhue Coolidge, recounted that a young woman sitting next to Coolidge at a dinner party confided to him she had bet she could get at least three words of conversation from him. Without looking at her he quietly retorted, “You lose.”

Coolidge was a man who in many ways was a fish out of water in his Presidency. In Return to These Hills: The Vermont Years of Calvin Coolidge,

Calvin Coolidge, the careful, quiet Vermont Yankee, took his place as the leader of the American people in the age of bath tub gin, of flappers and the Charleston, of raccoon coats and Stutz Bearcats. Millions of his fellow citizens withdrew their life savings from the bank for a giddy fling in the always rising stock market. It was the era of the Great Experiment, Prohibition, which paved the way for mobsters, hijackers, and corrupted officials. It was the age of America on a grand spree. Amidst the glitter and the dazzle was the man who stood for all the Puritan virtues and who watched those traditions collapsing all around him. 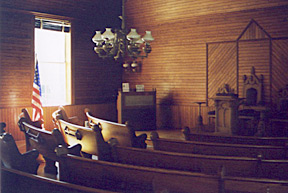 Towards the end of his life, Coolidge remarked that “I feel I no longer fit in with these times.” After visiting his home and learning so much about him, I can imagine that he would have felt very out of place in America during the 20’s and early 30’s. In fact, one book written about him is called A Puritan in Babylon

. He was raised to be a true Vermonter and American – hardworking, thrifty, honest, community-oriented, family-oriented, and God-fearing. I think this photo of the Union Church in Plymouth Notch shows both sides of Coolidge. The American flag represents his love of country and his service to his country. It stands beside the pew where the Coolidges worshiped each week, demonstrating their dependence on and reverence for God. 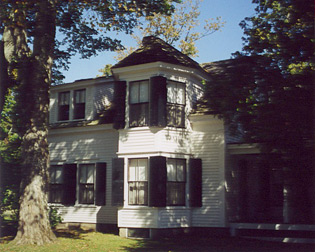 It is amazing to me that someone from such a humble place found himself in the Presidency. In many ways he lacked so many of the qualifications one would expect – he didn’t come from a well-connected political family, he didn’t come from money, etc. But nonetheless he became President, was easily reelected, and left office when he declined to run again after the death of his son. I can never think of his story of being sworn in as President of the United States in this humble home in a tiny Vermont hamlet without feeling a certain sense of awe.

Coolidge himself reflects on his experience as President in his autobiography:

All of these trials and encouragements come to each President. It is impossible to explain them. Even after passing through the Presidential office, it still remains a great mystery. Why one person is selected for it and many others are rejected can not be told. Why people respond as they do to its influences seems to be beyond inquiry. Any man who has been placed in the White House can not feel that it is the result of his own exertions or his own merit. Some power outside and beyond him becomes manifest through him. As he contemplates the workings of his office, he comes to realize with an increasing sense of humility that he is but an instrument in the hands of God.

Here is Coolidge in the first recorded Presidential address in 1924. 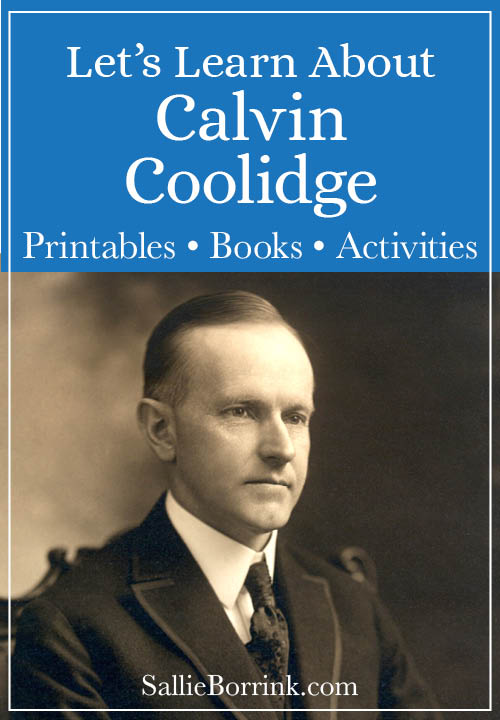 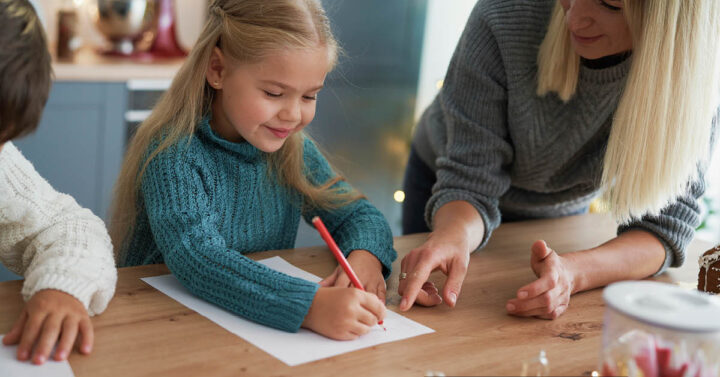 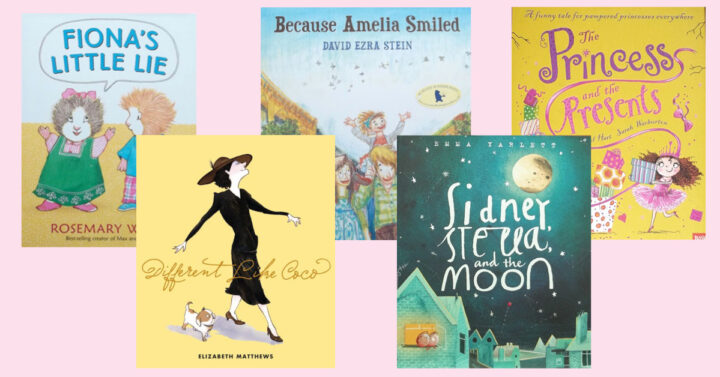 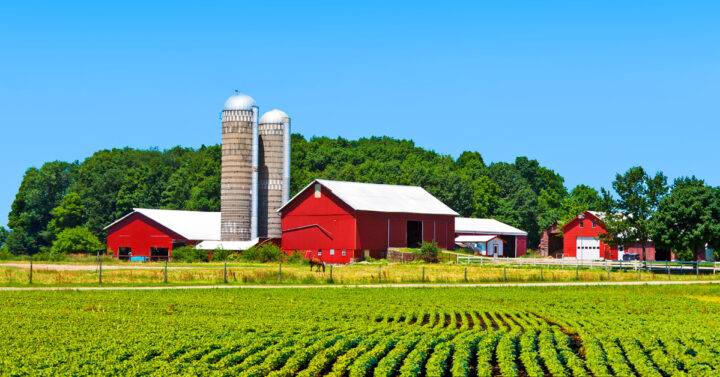 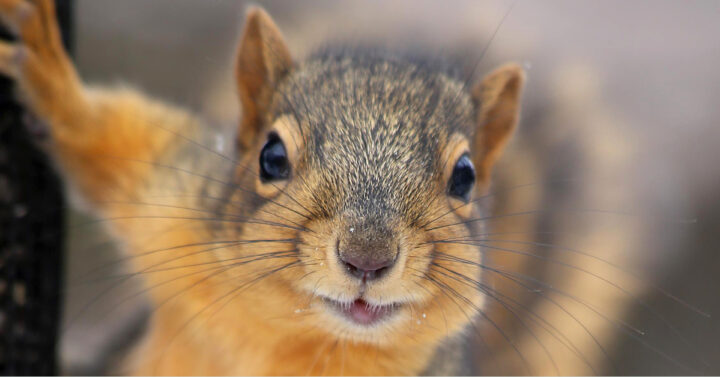 Let’s Learn About The Apollo 11 Moon Landing
Next Post:A Day In Our Cozy Life #1 – On The Deck, Calico Critters, Farmer Boy, and More