You are here: Home / Our Cozy Family Life / Around Our Home This December

Around Our Home This December

Last Friday morning we went to the periodontist where Caroline had dental surgery done. We’ve had to take her to the ER a few times for various things, but this is the first time she’s been sedated. I was totally fine while they were getting her prepped, but once she was under and I had to leave the room… I lost it in the bathroom.

It was strange for me to be on the other side. I’m almost always the one in our little family undergoing the procedure. Watching my child go through everything hit me much harder than I anticipated.

Gingivectomies and a Frenectomy

She had a situation where two upper adult teeth in the front had dropped (years ago) but did not break through the gum. Her particular situation was apparently quite unusual because when I went back after the surgery, both the anesthesiologist and her nurse were animatedly discussing how genuinely interesting it was to watch this particular procedure. There was a membrane wrapped around each tooth so that it was encased. The periodontist removed the membrane with a laser. Caroline also had a frenectomy (upper) done.

Thankfully it all went well and Caroline has fully recovered after being really out of it and in a fair amount of discomfort for four days. The surgery should have a very positive impact on her life and for that we’re thankful. She has been through so much dental stuff this year (in addition to previous years). I’ve lost track of how many teeth she’s had pulled this year and the build up to every appointment is exhausting for everyone involved for weeks beforehand.

Last week we went to the Frederik Meijer Gardens for the Christmas display. There are many trees decorated to represent countries around the world. Caroline especially liked the Iceland tree. 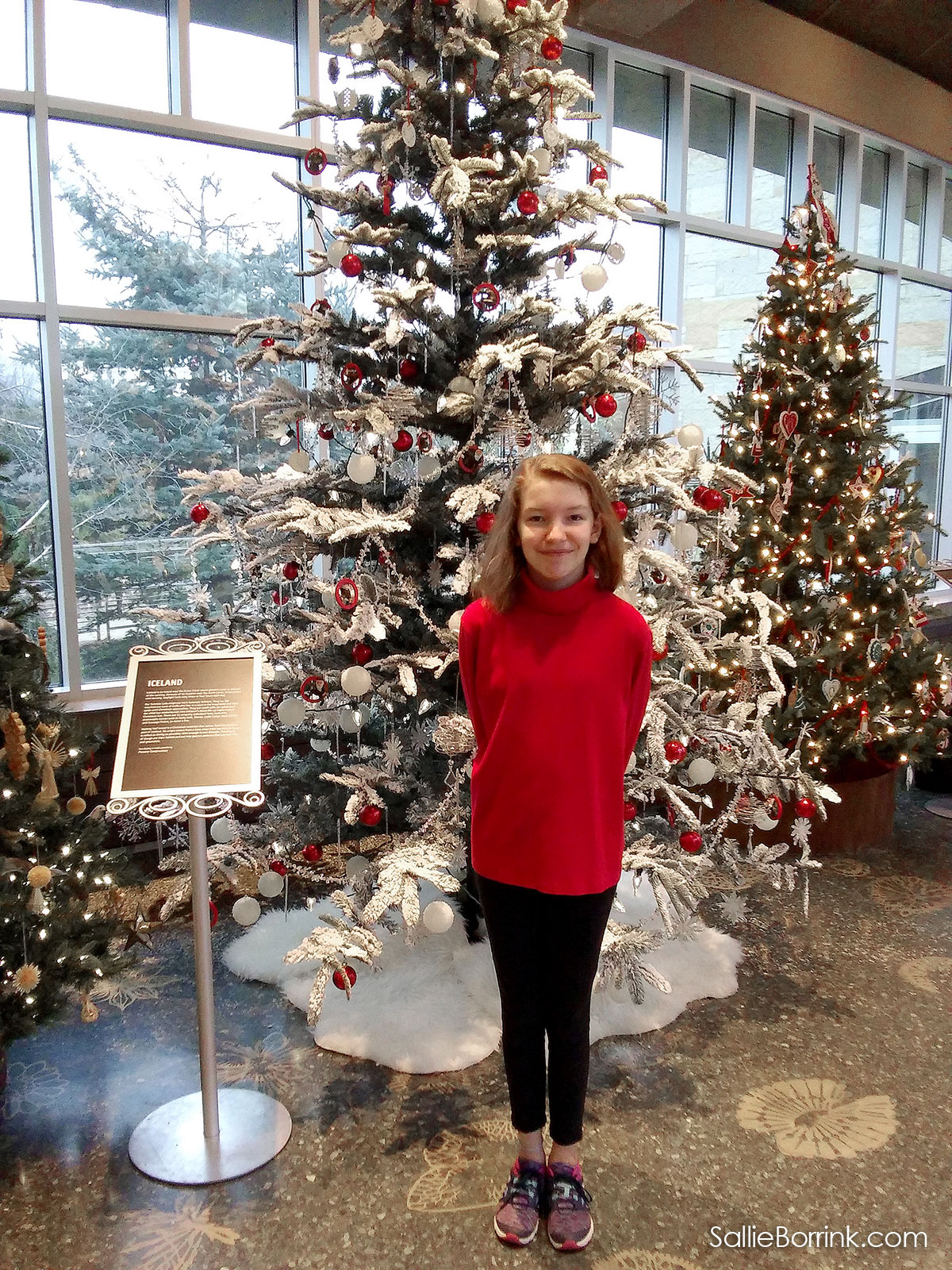 We hadn’t been in a few years so it was nice to see it with fresh eyes. These were some of my favorite ornaments on the Hungary Christmas tree. 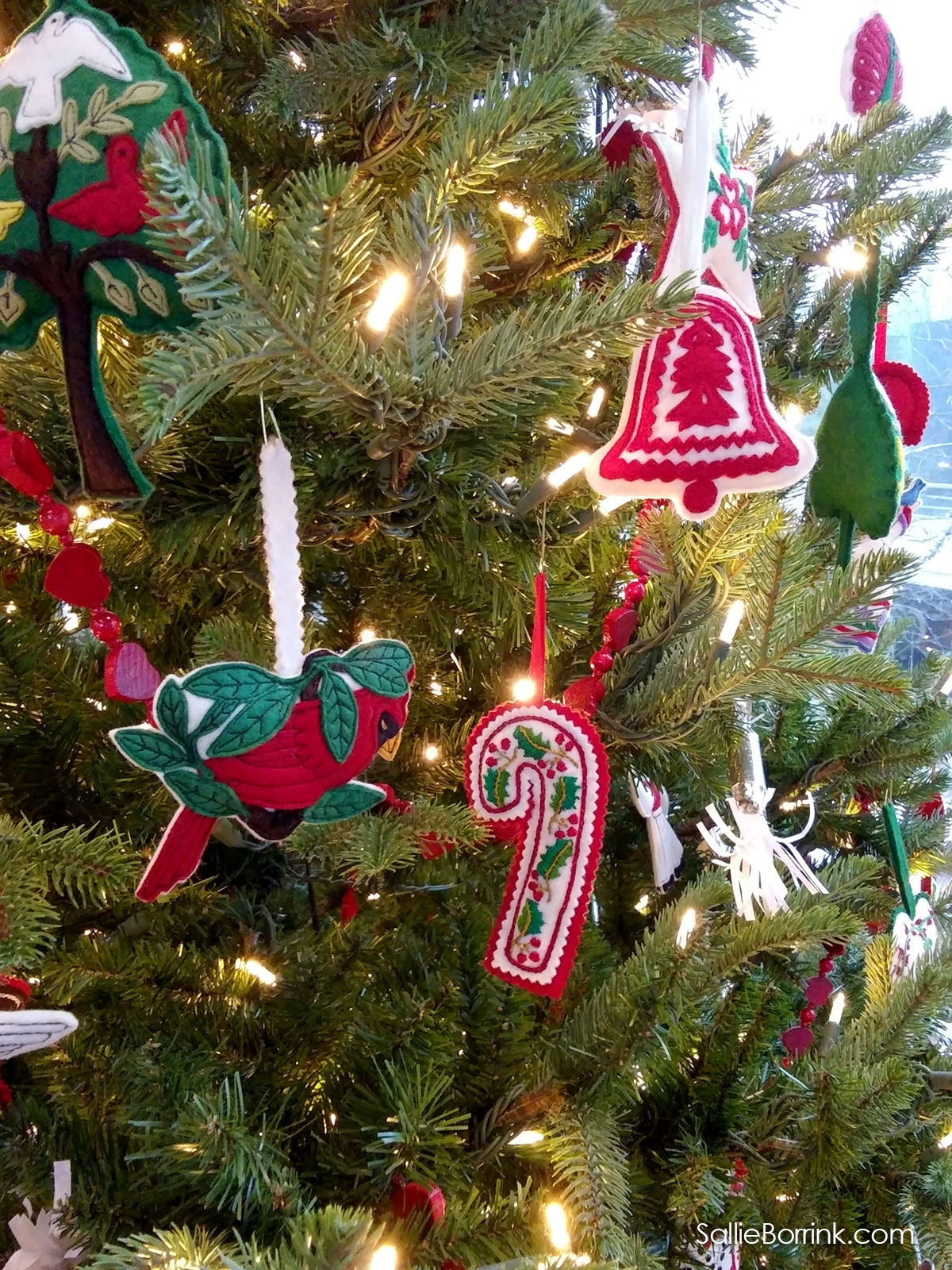 More from the Hungary Christmas tree 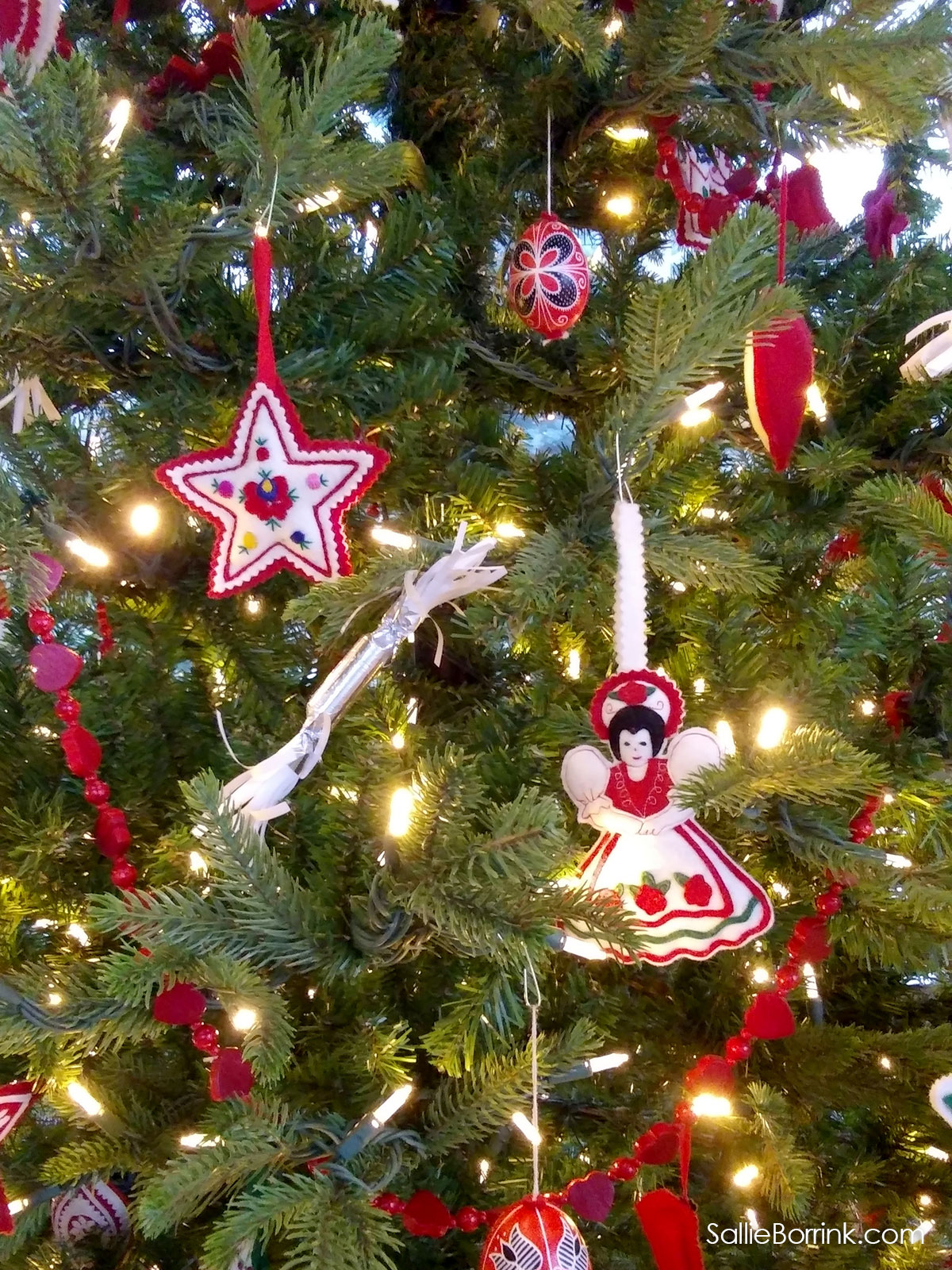 This is part of the Victorian Garden. The wooden structure on the left is for the train that travels all over the garden. 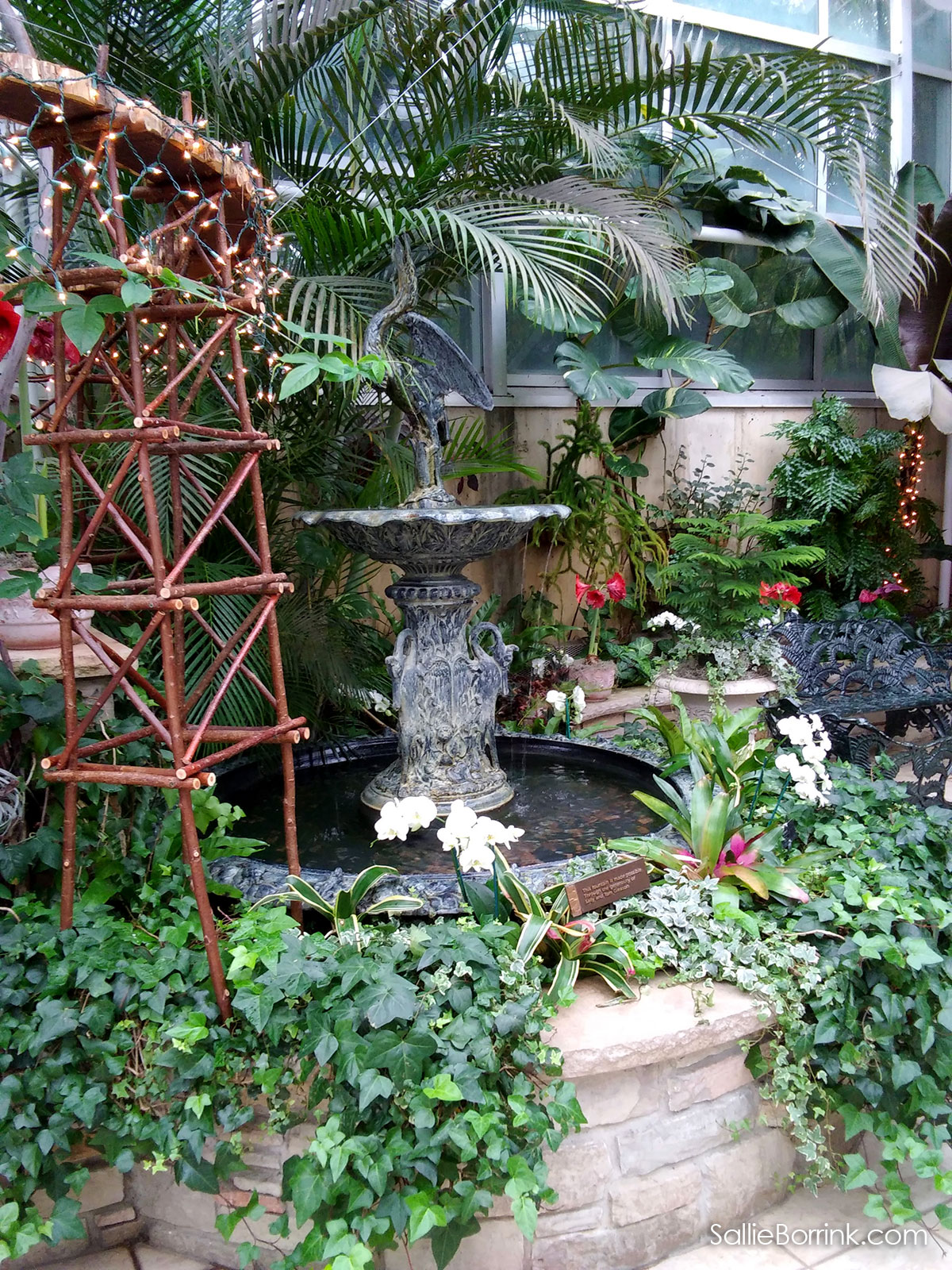 There is a large area filled with miniature buildings made completely out of natural materials. Most of the major buildings and landmarks around Grand Rapids are represented as are buildings from Grand Rapids’ sister cities around the world. We think this one is from Poland. 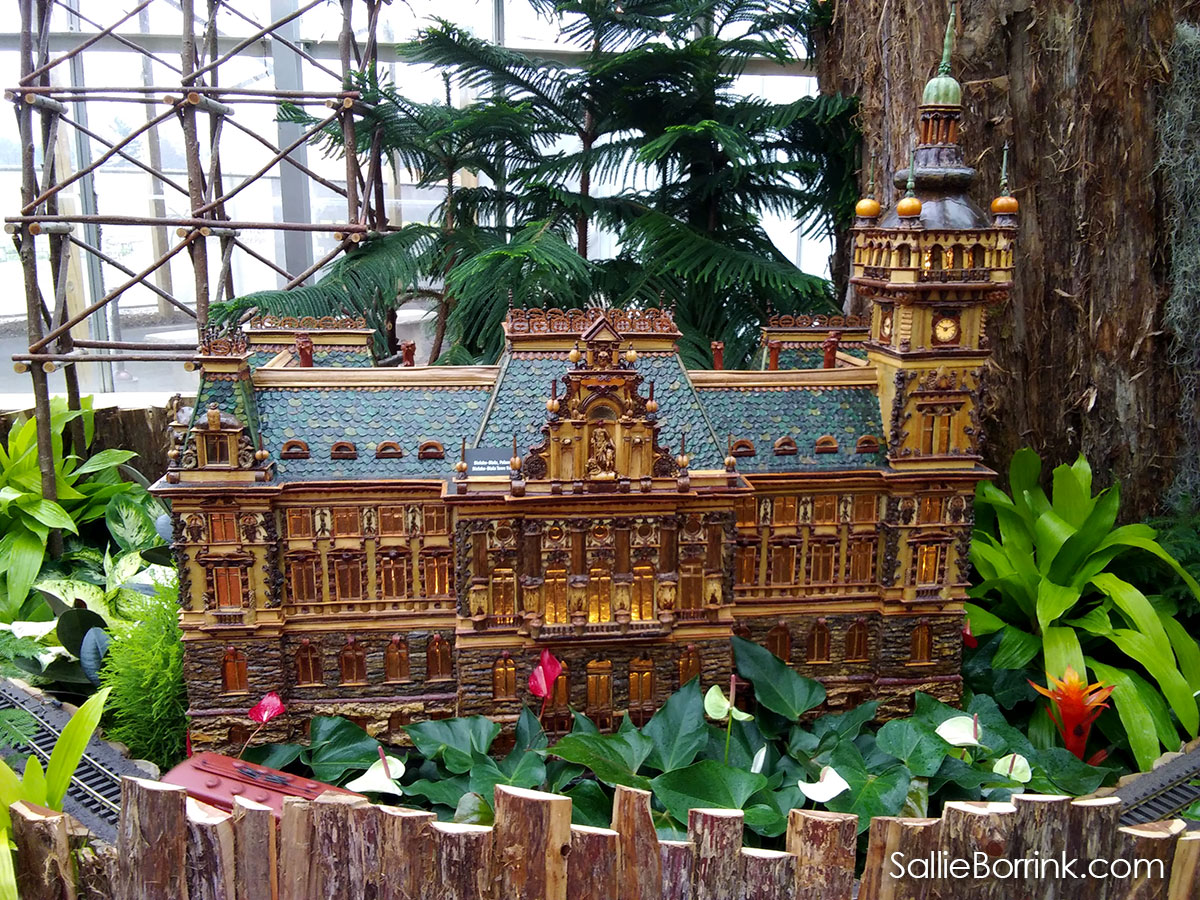 This is the Meyer May House in Grand Rapids (designed by Frank Lloyd Wright). We’ve been on a tour of the real thing. You can see the leaves that cover the roof. 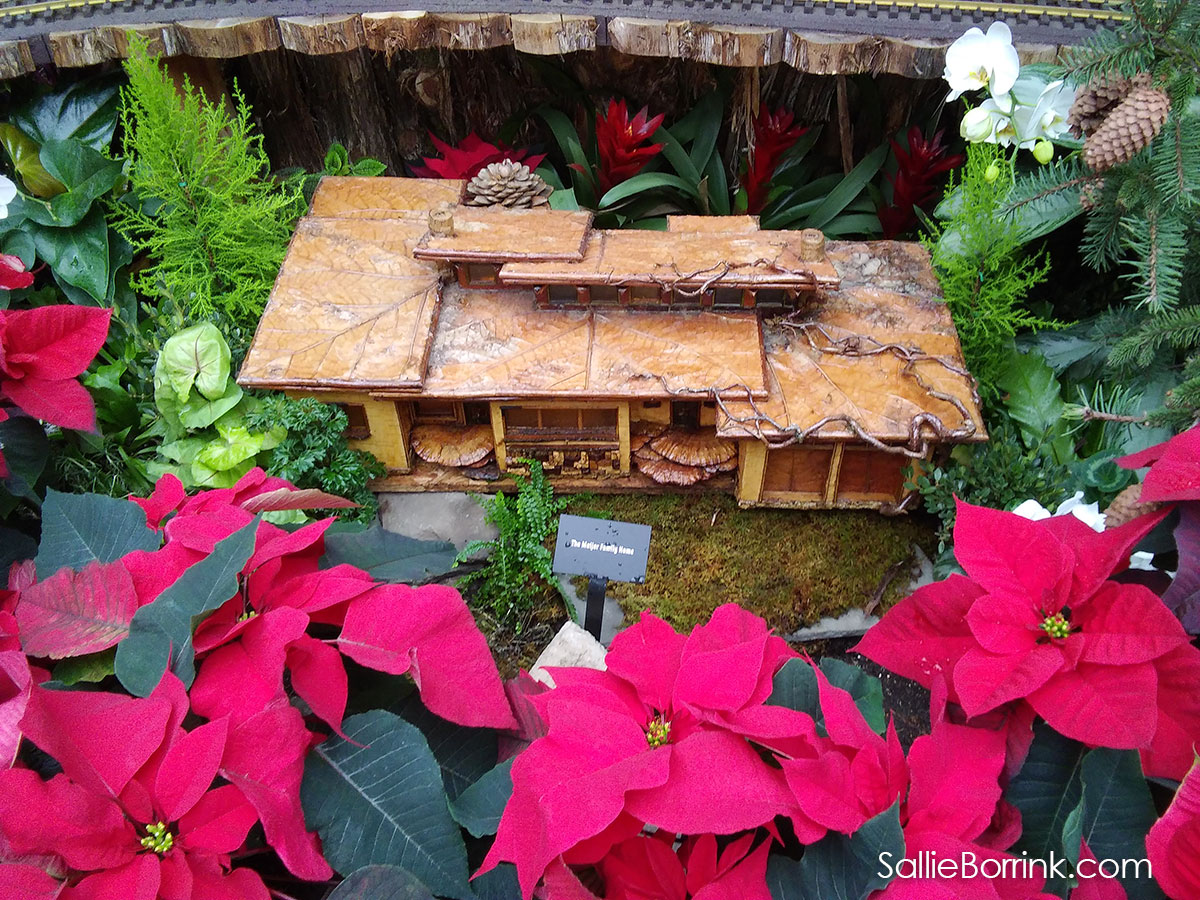 Another building with amazing detail 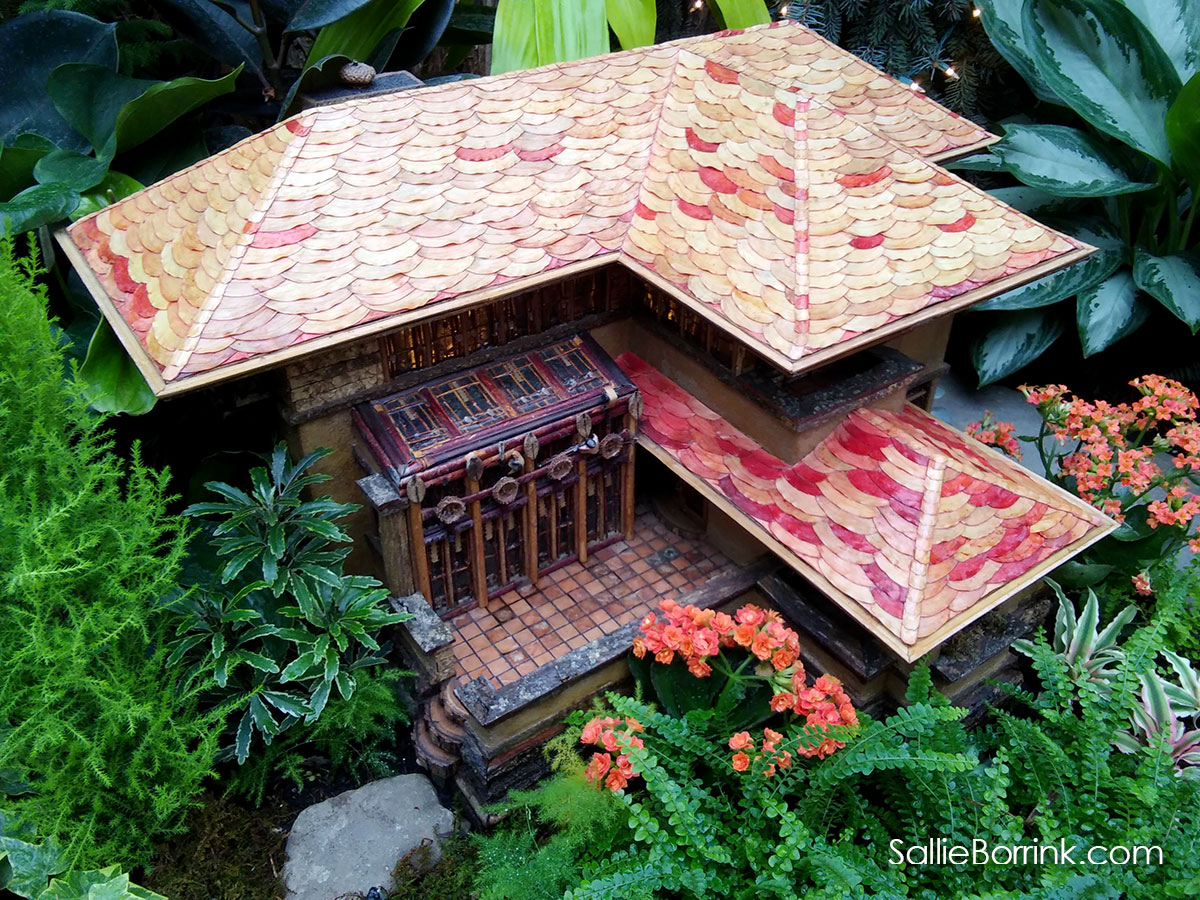 Some more shots at the garden. You can see the train traveling behind us. Little kids just love the train! LOL! 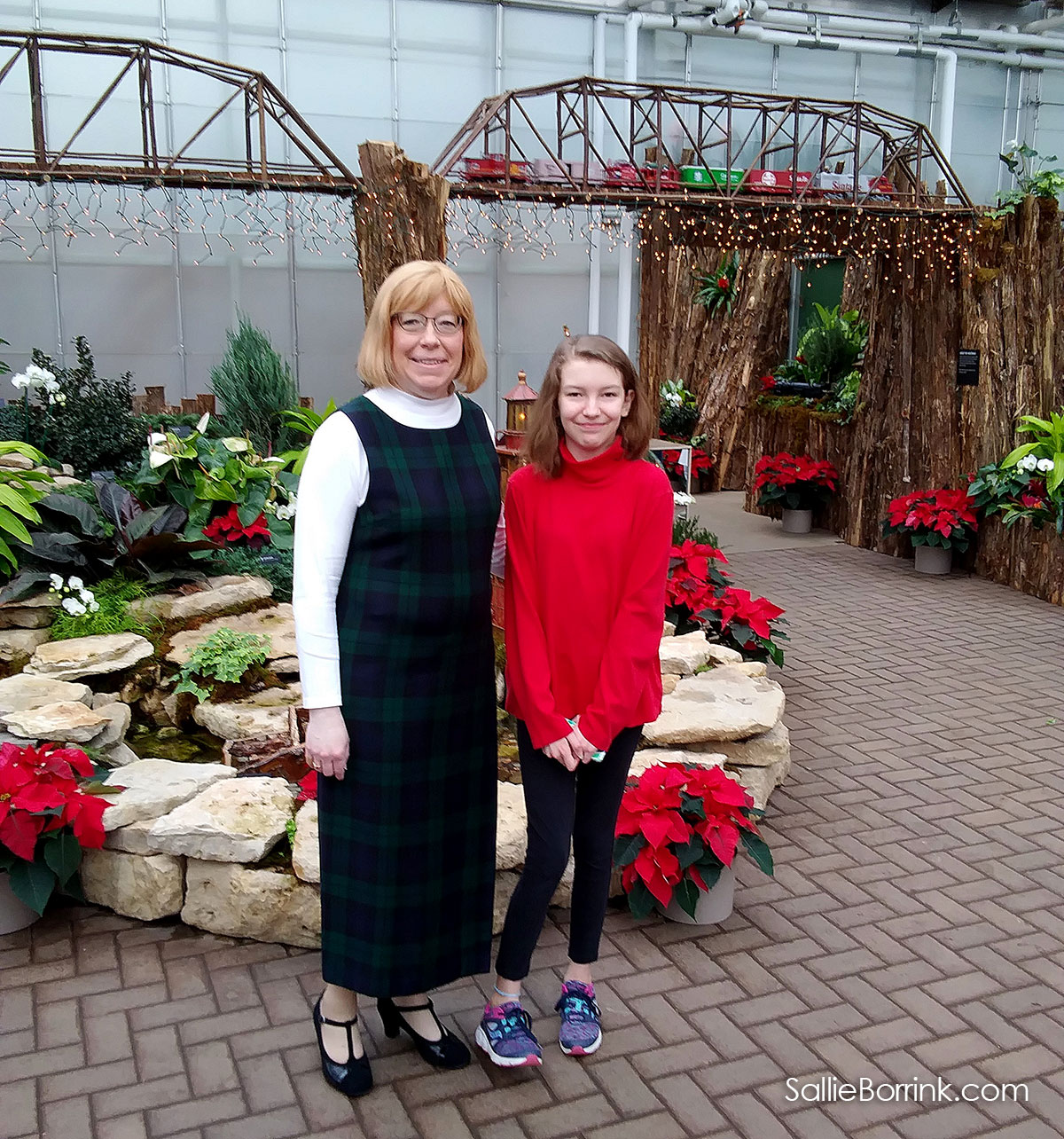 David and Caroline looking very Christmassy. You can see some of the different buildings behind them as well as the elevated train tracks. 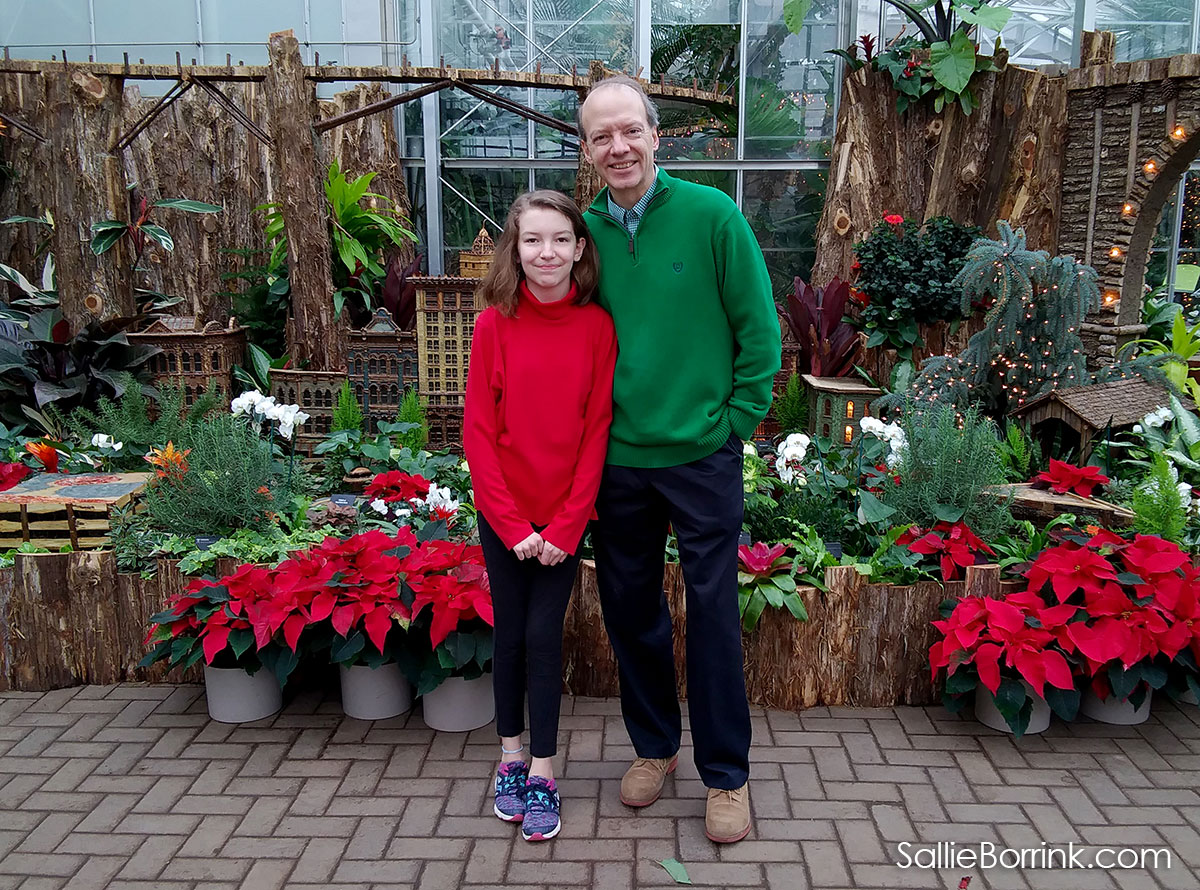 Who Took My Seasons?

I don’t know what your fall and holiday season have been like, but I’m still waiting for autumn after our horrid summer. I feel totally out of sync with the months this year. Our weather has been so off all year that it’s like my brain can’t grasp that today is December 21st. I’m still waiting for a nice autumn Saturday with the windows open and Spartan football on the radio in the afternoon.

The entire year has just been off. All the benchmarks I rely on to feel the rhythm of the year and seasons totally went out the window. The Spartans got bumped early from the NCAA basketball tournament in the spring. Many of our Spartan football games were at weird times like 10:30 p.m. in Arizona and Friday nights. We have had zero rhythm with our homeschooling and co-op this year with dropped and added classes, multiple dental procedures, sickness, weather cancellations, etc.

We went from winter to summer in the “spring” and summer to winter in the “autumn” in like seven days each time. I never even had to wrestle with transition clothing this fall because we went from short sleeved shirts to turtlenecks in one week. It was insane. We’ve had almost no snow in December. We had a stretch of weather in November and early December when we received a total of 6.5 hours of sunshine in 18 days. That’s 6.5 hours spread out over 18 days. I like a mix of clouds and sun, but this was nuts.

What Happened To My Holidays?

I think this is the first year since I became a teacher that I didn’t pull out my autumn picture books. Ditto with Thanksgiving. Due to a series of events we never even celebrated Thanksgiving this year so we had no Thanksgiving meal. (Well, I don’t get to eat the Thanksgiving meal due to my EoE, but David and Caroline do.) I’m doing all my Christmas stuff the week before Christmas which is unusual for me.

We were supposed to visit my parents for a few days before Christmas but put it off until after Christmas because Caroline was not feeling well after her surgery. Then I hurt my back. And now our “better” car (our cars are 20 and 15 years old) has developed a problem that makes a long drive unsafe. So we’re officially going to be home for Christmas after having to adjust our plans multiple times.

It fits with the entire year of 2018. I hate to complain because I know things could be much worse, but this has been a challenging year for our family for so many reasons (most of which I haven’t elaborated on here). Most of the challenges weren’t majorly difficult if they were isolated happenings, but it has been one thing after another all year. We’re all weary and I think we are going to do a slightly modified version of our hibernation homeschooling this winter. Not quite as extreme as that year, but a version of it. I’m thankful that we already live a simplified and cozy life which gives us a basic steadiness in the midst of it all. But still. I’m hopeful for 2019 to be filled with many good blessings and positives.

Caroline Is Growing Up

On the plus side, Caroline is now old enough to be such a huge help. She’s doing a lot of the gift wrapping this year and I truly appreciate it. (It is more special seeing packages wrapped by her anyway.) When we were decorating, she knew where things went based on previous years so she was very helpful. I’m thankful for the young lady she is developing into. 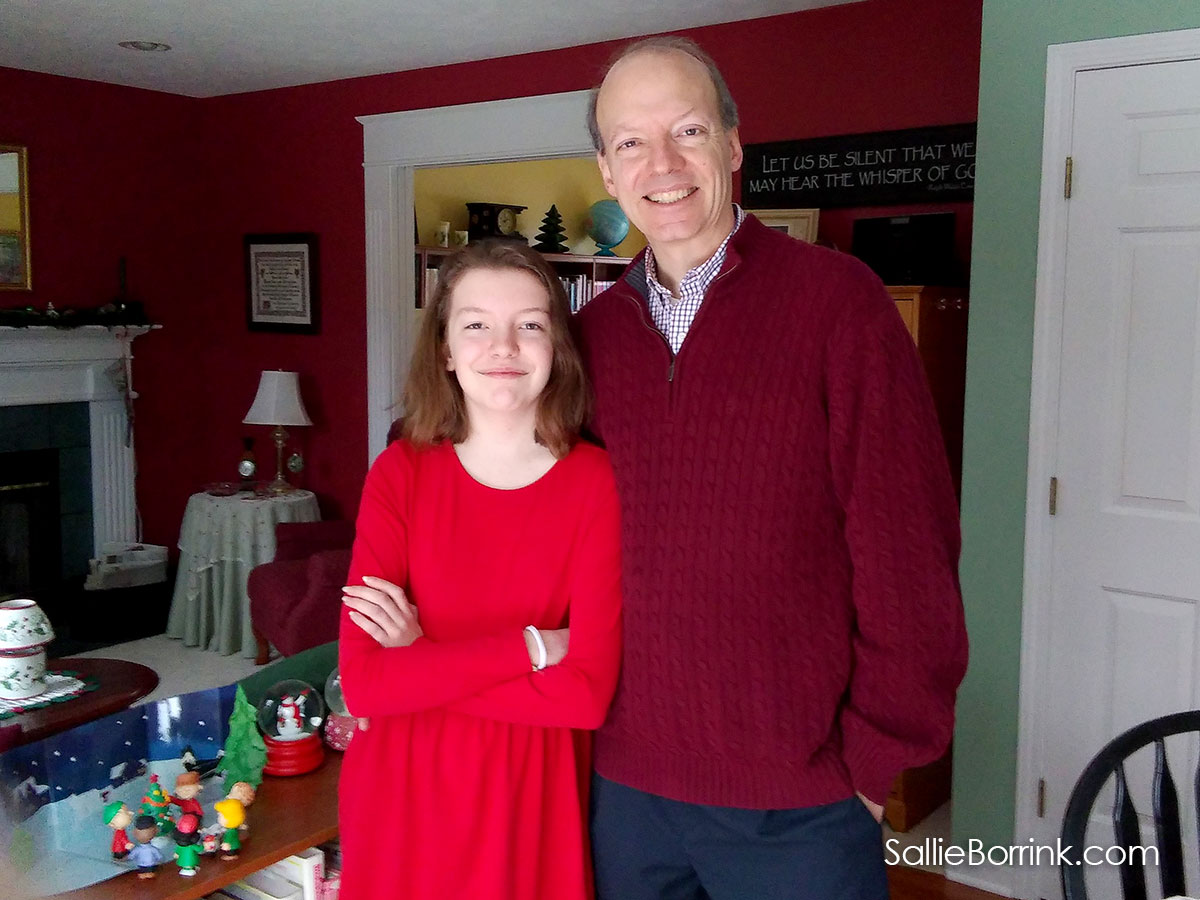 She’s also funny. She has an excellent sense of humor and is clever with words in ways far beyond her years. We’re truly blessed to have Caroline as our daughter. 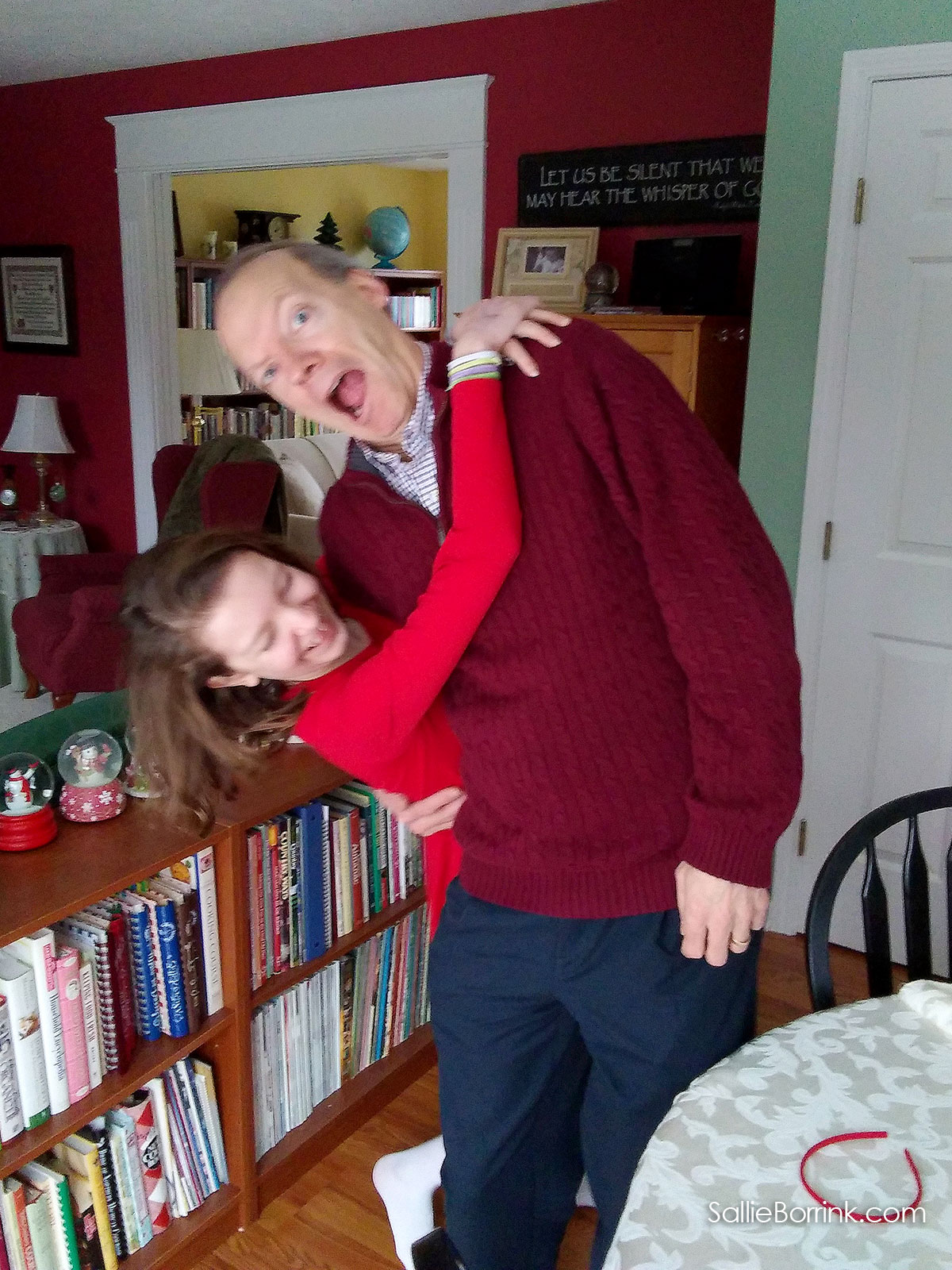 I’m spending the holiday season working and restructuring everything here. Hopefully you noticed the lovely new design. I’ve been working behind the scenes since mid-November fixing all the SEO-related issues with categories and introducing tags to make things easier to find. I’ve spent months this year educating myself about SEO (search engine optimization) and starting to implement what I’ve learned. It’s really fascinating when you dig into it. It’s very much like a game you try to win or a puzzle you try to solve.

I think I’m going to change the service I use for subscribing on my site and sending out emails so I’m working through those decisions and details. I need something simpler. ConvertKit is fantastic, but I’m not using all the features I’m paying for so I’m not sure it’s worth it at this point.

And, of course, I’ve been posting all the components to A Quiet Simple Life Planner & Guidebook. I truly hope using these printables will bring more peace, understanding, joy, and beauty to people’s lives in the days ahead.

So that’s our December so far. Probably not the post full of cookies and lights and such that you would get on most sites. We simply roll differently around these parts. LOL! 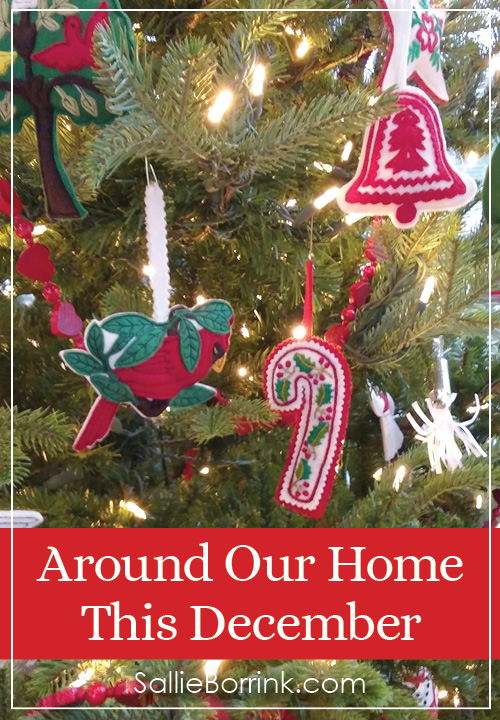 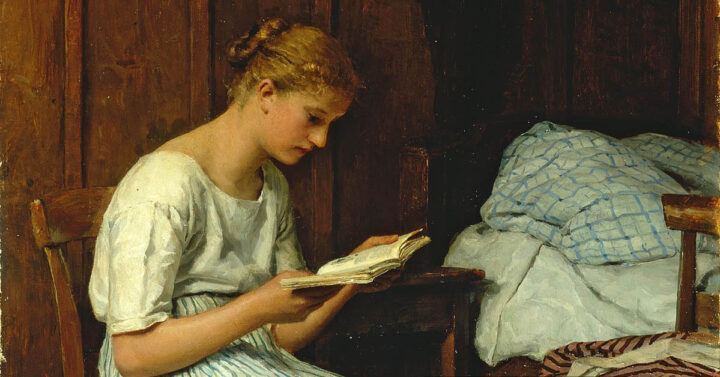 In Our Cozy Home This Week No. 2 – Home Inventory, Christmas Planning 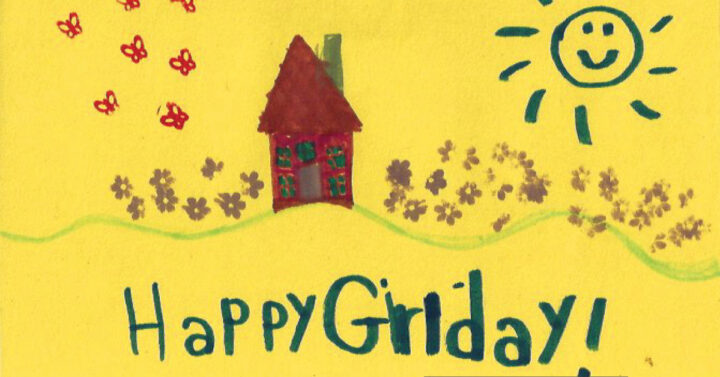 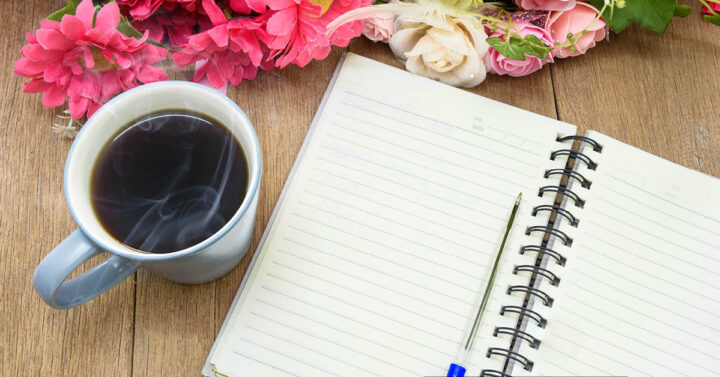 Around Our Home In June 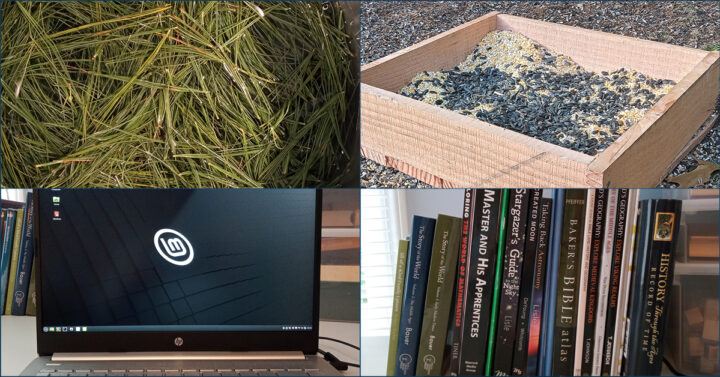 Highlights From My September Weekend