“We must get up every day and purpose in our hearts to trust God, be in His Word, be in prayer, and keep our focus on the truth He has revealed to us in His Word.”

David and I spent a number of years studying in-depth the issue of women in the church. If you’ve been around here for some time, you know I had another (now closed) website where I shared my research. There are a few posts on this site related to it including Why I’m Not a Christian Feminist (and What I Am). It was a big part of my life for a number of years.

There were readers at that time who were very upset with me when I started asking these questions. They automatically assumed asking questions would lead to false teaching, heresy, and departing from the faith. In many cases, this is correct. However, David and I did not lose our faith. We are still what would be called conservative biblical Christians. Why is that?

While I was researching these topics, I got to know from a distance who the movers and shakers were in these circles on both sides of the argument. I read what they wrote and had a fairly comprehensive knowledge of the big controversies that developed. But I never ran in either of those circles for a variety of reasons. I was really more of an observer which was fine because there were fundamental differences in the way we approached the questions compared to both camps.

In this post, I want to focus on the women who were promoting the egalitarian or liberal view of the role of women in the church. As I watch more and more of these women depart from the historic Christian faith, I’ve come to see that O’Sullivan’s First Law describes the difference between where I have ended up and where they have ended up. 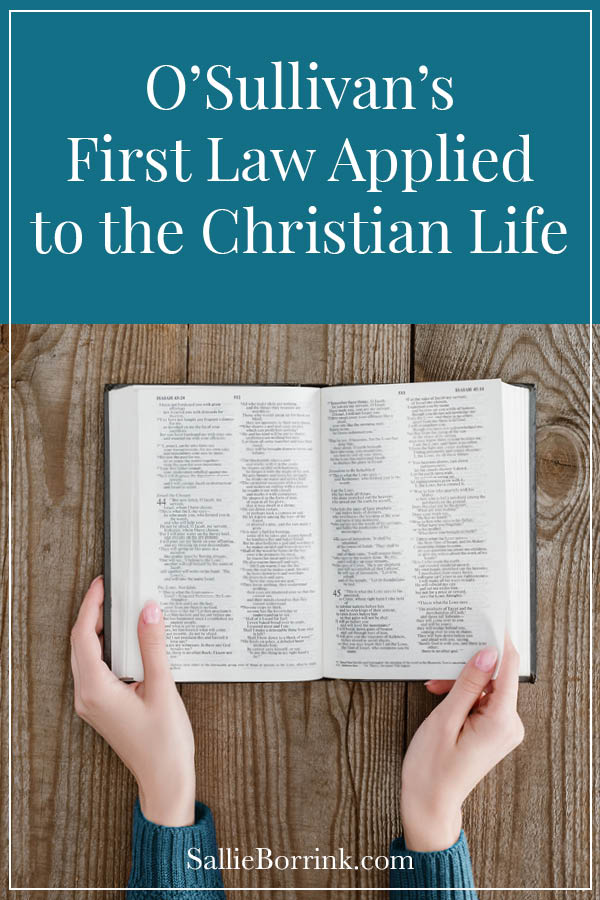 O’Sullivan’s First Law describes the leftward drift of many politicians, leaders, and organizations. First coined by John O’Sullivan in 1989, it states: “All organizations that are not actually right-wing will over time become left-wing.”

Here is how I would rephrase it for this particular situation:

When David and I were working out our theology in this area, there were certain truths that hemmed in our study. They included:

We always went back to “what do the Scriptures say.” We asked lots of questions because God is fine with us asking questions if the goal is to know and follow Him better. God knows if we earnestly desire to submit to Him and are honestly seeking answers. He’s not bothered by our genuine desire to know the truth. Our approach was, “Lord, we want to understand this and follow you. Help us to figure this out and do the right thing.”

The difference is that those who are walking in all kinds of error did not maintain those same boundaries. There were several ways it happened, but it all goes back to the same deception in the Garden of Eden. “Did God really say?” Once you no longer trust the Word of God, you are toast. You really are. Once you start pulling at this thread and that thread, the entire thing unravels because there is no way to stop it. If you can explain away or disregard things you don’t like, it never ends.

Once you no longer trust God’s Word or God Himself, there is only one logical end. And that’s a steady shift toward liberalism, leftism, and often leaving Christianity altogether.

I think there are a few reasons for this among the people I have observed. Today, I’m simply going to list them and not try to explore them in depth because I want to write this and post it. (I’m focusing on doing more writing a post and publishing it rather than thinking everything must be thorough and lengthy.)

Reasons why people go left and fall off the rails.

There are others, but these are the ones I have observed most regularly.

Why am I writing this today? To remind all of us that we must get up every day and purpose in our hearts to trust God, be in His Word, be in prayer, and keep our focus on the truth He has revealed to us in His Word. There is no middle road. There never really was, but it was easy to drift along in our culture.

If you aren’t taking every thought captive, you will drift left. If you aren’t purposefully filling your mind with truth every day, you will drift left. History is replete with examples. Look at how Charles Spurgeon had to fight the Downgrade Controversy late in his life. Read about J. Gresham Machen’s fight against liberalism in the early twentieth century. These men fought against the spread of liberalism at great personal cost. Time has proved them both correct. There is nothing new under the sun. Those who deny the historic biblical faith today are doomed to repeat the same mistakes.

In the lowest moments of my Christian walk, I often reminded myself of this truth: Many who have gone before me have found the Lord to be faithful. For centuries now Christians have walked with the Lord, learned from His Word, and known His love and care. Even though my life might have seemed all wrong at the moment, I could take comfort in the fact that my Christian brothers and sisters had set an example of faith for me. Knowing I was connected with those who came before me was always a comfort and strengthened my resolve to continue walking in faith.

Every day we are either drawing closer to the Lord or allowing ourselves to slowly drift left into apostasy. There is no other option. There is nothing new under the sun and it is the height of arrogance to think we can avoid the enemy’s trap that so many others have fallen prey to over the centuries. We aren’t special exceptions to the reality of life.

Make the deliberate choice this day and every day who you will serve.

Morning Hope – Psalm 49
Next Post: Eventide Blessing – Abide With Me